Factors and the forcats package

Factors are a special variable class in which data are stored internally as integers, but each integer level has a corresponding character value label that is used when the data are displayed. This can be partularly helpful when running statistical models which expect numeric (e.g. 0/1) inputs.

Factors are similar to labeled values of categorical variables in Stata.

You can read more about factors here.

The package forcats provides useful tools for working with factor variables. You can read more about forcats here.

For example, in the automatically generated AJS dataset, the variable sex is a factor. In the underlying dataset the levels are F, M, and U, but we can attach longer character labels that are displayed.

To change the labels for a variable, use the function fct_recode() from the package forcats.

After providing the name of the factor give the conversion statements, separated by commas, in the format NEW = “OLD”. Note that everything on the right-hand side (RHS) must be a character. So, if you want to give a new label to missing values, use the special term NA_character_.

First we use fct_count() from the package forcats to see the values in the factor:

Now we re-label the values using fct_recode(), also from the package forcats.

To change the arrangement of the levels, use fct_relevel().

This will impact the arrangement of the levels as displayed in graphs and tables. Give the name of the factor followed by the new arrangement (pay attention to spelling!).

If a variable is already a factor, it can be difficult to remove levels that do not have any observations. These levels will continue to appear in graphs, tables, etc.

For example: here we look at the values present in the variable sex. We want to convert those that are “Unknown” to proper R missing values (NA).

We can see that the value “Unknown” now has a count of zero, but it is still present as a level of the factor variable and will appear in tables and graphs. To remove this level entirely we use fct_drop(), which drops unused levels from a factor.

Use the argument only = to drop specific levels: fct_drop(linelist_cleaned$sex, only = “Unknown”)

The %in% operator looks to see if any elements of a vector are within another vector. You can use this to filter your data to a specific set of values. It’s like a parallel version of ==. A vector can be created with the function c(), and a variable in a data frame is also a vector.

Here, we show how %in% can be used to find which letters in the word “epidemiology” are vowels:

In the templates, %in% can be used when creating the variable DIED (when a patient died). The variable DIED is logical (either TRUE or FALSE). It will be TRUE if the value in exit_status is either “DD” or “DOA” - those are the two character values present in the vector. You can add to or change the terms listed in the vector.

You can read more about the %in% here

The package dplyr contains functions that are used in the templates for joining (“merging”) data frames. There are many ways to conduct a join, and it is important that you use the correct option - otherwise you risk unexpectedly losing data!

It is wise to verify any join by inspecting the joined data frames and the resulting data frame.

There are more reference materials on dplyr join functions in the cheat sheet from UBC’s STAT545 course (by Jenny Bryan) and course notes from William Srules. The animations below were originally from https://github.com/gadenbuie/tidyexplain.

An inner join of data frames x and y (inner_join(x, y)) returns only the rows from x which have matching values in y, and includes all the columns from both x and y.

A left join of data frames x and y (left_join(x, y)) prioritizes only the “left” data frame (x), thus returning all rows from x with all columns from x and y. If a row in x has multiple matches in y, all combinations are returned as separate rows.

For example, a left join occurs in the AJS template when calculating attack rate by region, where cases and population_data are joined by their variable patient_origin.

A full join of data frames x and y (full_join(x, y)) returns all rows from x and y. If there are any rows in x not in y (or visa-versa), the missing values are NA.

This is often used to inspect which rows are unique to a data frame. An anti join of data frames x and y (anti_join(x, y)) returns the rows from data frame x that do not have matching values in data frame y. Only columns from x are returned.

Graphics with the ggplot2 package

R has the capability to make beautiful and versatile graphics using the package ggplot2 and its function ggplot(). Below is a brief overview of the use of ggplot(). There are too many aspects of ggplot() to cover here, so it is highly encouraged that you download and review this ggplot cheatsheet.

For further reading, see this data visualization tutorial and this gallery of visualizations and extensions for inspiration.

A ggplot() command is typically built using sub-commands linked by + symbols. The sub-commands are executed one-after-another to build the final plot. The core components to provide are:

The first command ggplot() creates an empty coordinate system to which layers of visualization and nuance are added.

Secondly, the geom is specified, indicating whether the data should be displayed as points, lines, bars, a map, etc. Without a geom, the data will not be visualized and the coordinate plane will be empty.

Other optional sub-commands can address the scales (e.g scale_fill_brewer() chooses a scale for the fill aesthetic based on the Color Brewer 2 color scales), labels (e.g. labs(title = "Attack Rate by Region") to define a specific title for the plot), themes (e.g. theme(text = element_text(size = 18)) makes all the text in the plot be a minimum size of 18 points), etc. 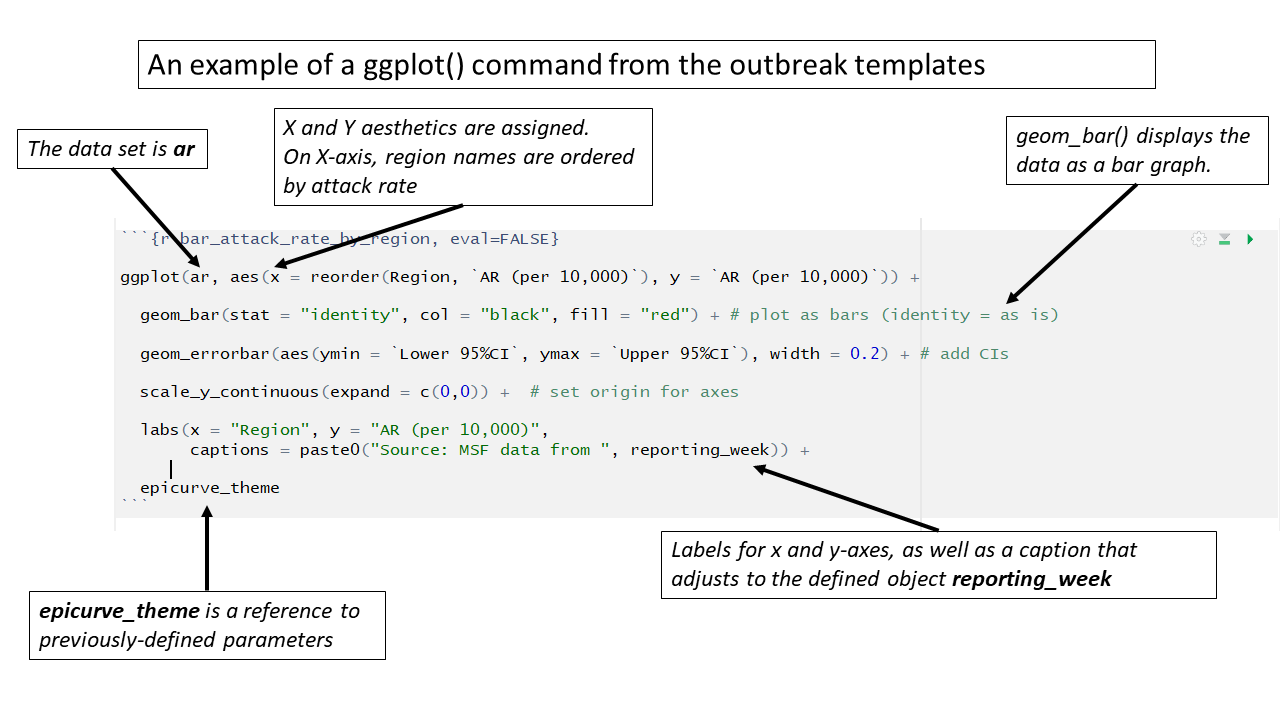 A command beginning with ggplot() will print the visualization but not save it. Using the assignment operator <- in the first line will assign the visualization to an R object and save it for later use. Print it by running a command of just the object name.

In the “Place” section of the template, ggplot() is used to create geospatial maps of attack rates and other indicators. In these cases, the coordinate system reflects latitude/longitude, and geom_sf() displays the spatial tiles of the regions contained in the map.

In the outbreak templates, detailed aesthetics parameters are managed by creating “theme” objects that can be referenced multiple in multiple ggplot() commands.

Below, the object epicurve_theme is assigned certain superficial plot parameters that are not associated with the data such as x-axis text angle, absence of legend title, and grid-line color. This object is then referenced in ggplot() commands throughout the template.

A for loop is used to repeat or iterate code, making repetitive tasks more efficient. The “loop” repeats a series of commands, altering them slightly to account for different input values that are stored in a vector. This vector, or sequence of values, can be the values within a data frame variable.

In the outbreak templates, a for loop is used at the end of the Place analyses to create bar graphs and maps of regional attack rates for each epidemiological week.

The basic structure of a for loop is as follows:

In the outbreak templates, the for loop is more complex than the simple example above, but follows the same basic structure.

Numerous commands are located within the loop’s brackets { }, but the most important is the first: this_ar <- filter(ar, epiweek == i). This command restricts the large data frame ar to only the epiweek currently under consideration by the for loop. Thus, the data frame this_ar will be different for each iteration of the for loop . All the subsequent steps (producing a map and a barplot) are performed on this filtered dataset.

The final step creates a combined plot of the map and barplot for the current epiweek “i” using the plot_grid() function from the cowplot package. This plot is aligned horizontally based on the top and bottom of each plot. After producing the combined plot, the loop advances “i” to the next epiweek item in the vector, repeats all the commands in the brackets { }, and produces a new combined plot.

Here you can read more about for loops and iteration in R.