What is a script?

Scripts are files that:

While it is possible to enter and run commands directly from the R Console, scripts will be the default way to work.

If you are more familiar with Stata, a script is equivalent to a Do File.

Remember to save your script as you work!

What is a RMarkdown Script?

RMarkdown scripts can contain commands such as for data import, cleaning, etc. and are themselves the outline of an automatically-generated document containing text, tables, and plots produced by your code.

You can learn more about RMarkdown here and reference this cheatsheet 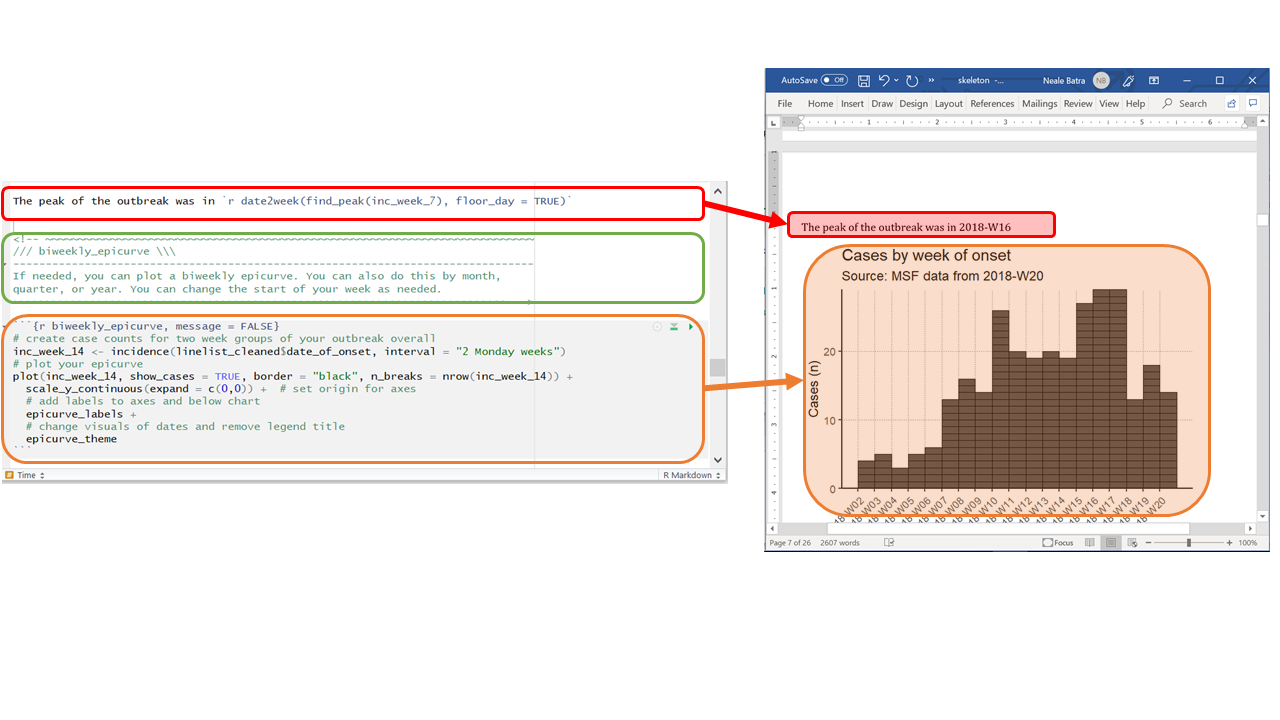 In the above RMarkdown template script, the white and gray code chunks produce text and R-generated graphics, respectively, in the Word document report. The green text does not appear in the final report.

While the RMarkdown may at first look like a wall of code, notice how “chunks” of code are differentiated by their color:

Use the Table of Contents menu in the bottom-left of the script to easily navigate between code chunks and sections of the script. The line numbers on the left side can be helpful to reference specific commands when asking for assistance.

While editing and testing your RMarkdown, you may want to selectively run or re-run R code chunks. You have many options in the script’s Run menu, including:

Progress bars and previews of chunk output/error messages help with revisions and trouble-shooting.

Every script should include helpful text that organizes commands and explains their rationale to collaborators. The # (hash or comment) symbol ensures that any text after the # and on the same line will not be executed by R as it runs the script. Such “commented” text will appear a different color than the code.

In the templates, you will see # serving three purposes:

Multiple lines of R code can be commented/uncommented by highlighting the lines and pressing the keys Ctrl, Shift, and C at the same time (Ctrl+Shift+C).

Any script (RMarkdown or otherwise) will give clues when you have made a mistake. For example, if you forgot to write a comma where it is needed, or to close a parentheses, RStudio will raise a flag on that line, on the right side of the script, to warn you.

Producing the final RMarksdown report is called “knitting”. When you are editing a RMarkdown script, you will see a special option to “Knit”" at the top of the script, near the save shortcut button. Clicking “Knit” will begin the process of creating the final document. The option to “Knit” does not appear for normal R scripts, only RMarkdown scripts. Note the following:

If you receive an error when knitting such as “openBinaryFile does not exist … Error: pandoc document conversion failed with error 1”, your R project file may be saved in a location with restricted permissions such as a network drive. The RMarkdown is likely not permitted to write the new Microsoft Word file to that location. Try saving your R project to a more local location on your computer.

If you are on an MSF computer, try writing saving the R project on the C drive where you have read/write rights - in general this is the c:temp folder.