Most tasks in R are performed through functions. A function is like a machine that receives inputs, does some action with those inputs, and produces an output. What the output is depends on the function.

Functions typically operate upon some object placed within the function’s parentheses. For example, when the function summary() is used on a variable of class numeric, the output is a summary of the variable’s numeric and missing values.

On installation, R contains “base” functions that perform common tasks. Specialized functions have been created by R users, verified by the R community, and can be downloaded within “packages” to your RStudio for use. One of the more challenging aspects of R is that there are often many functions to choose from to complete a given task.

Functions often ask for several inputs. Each piece of information needed is called an argument. Some arguments are required for the function to work correctly, some are optional. Arguments can take character, numeric, logical (TRUE/FALSE), and other inputs. Optional arguments have default settings if they are not specified. Arguments are located within the parentheses of the function, usually separated by commas. 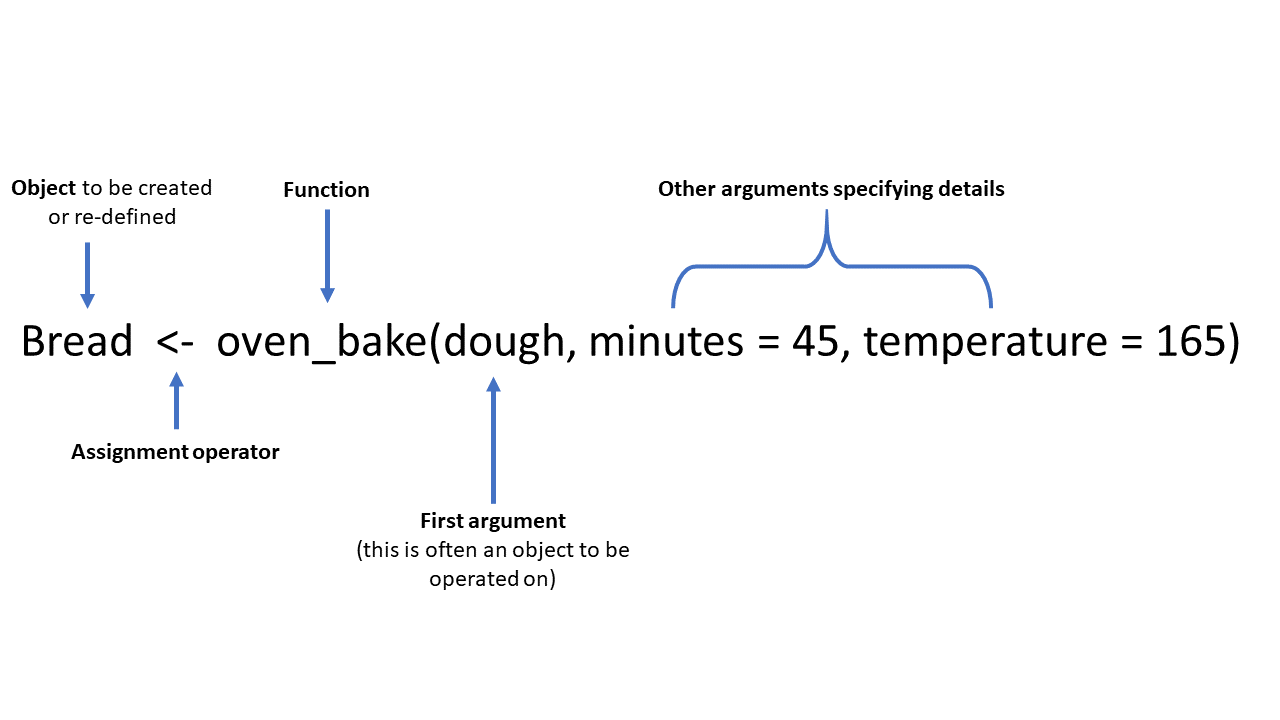 For example, this plot_age_pyramid() command in the templates produces an age pyramid graphic based on defined age groups and a binary split variable, such as sex. The function is given three arguments within the parentheses, separated by commas. The values supplied to the arguments establish linelist_cleaned as the data frame to use, age_group as the variable to count, and sex as the binary variable to use for splitting the pyramid. 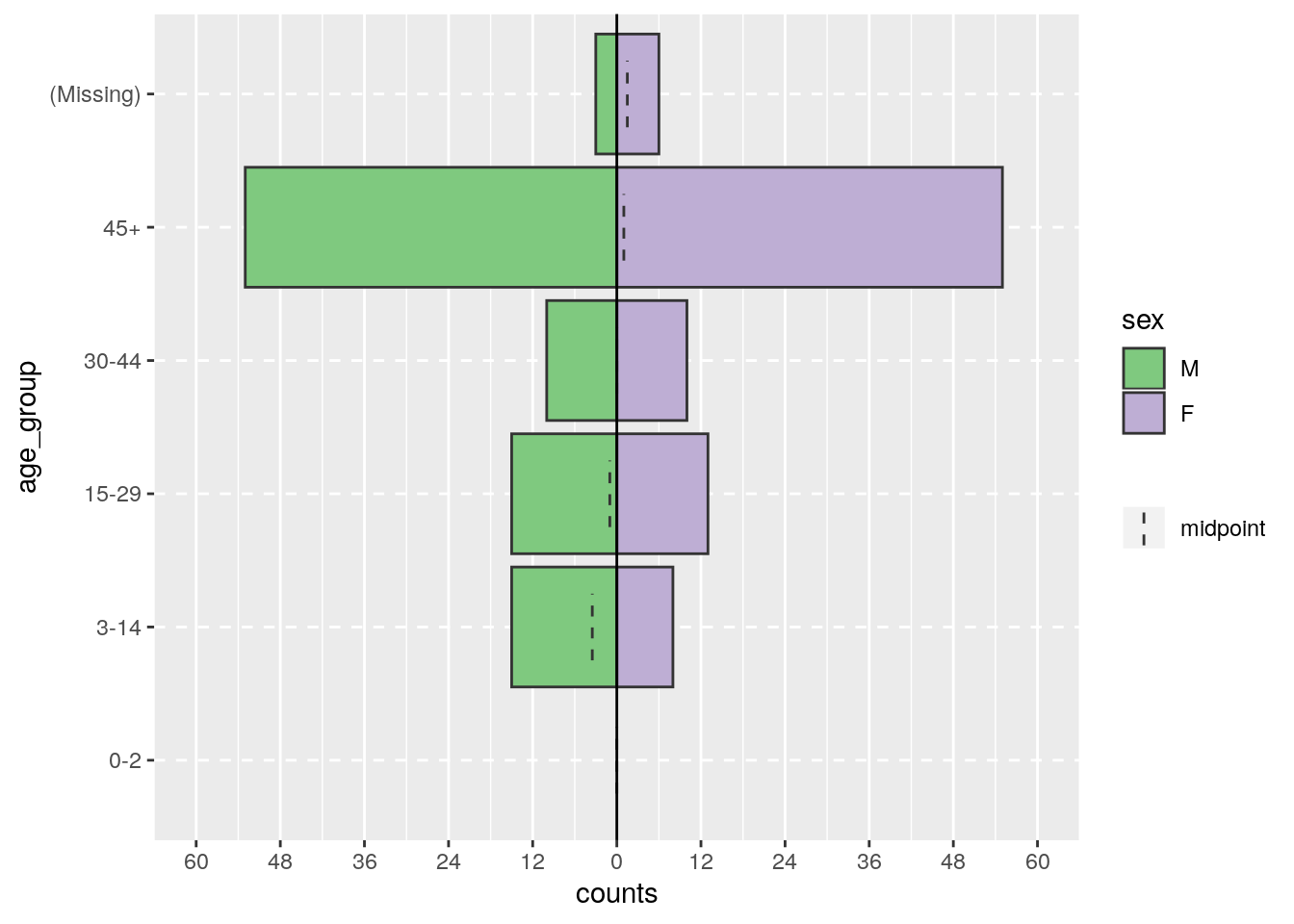 Often, the first half of argument assignment (e.g. data =) does not need to be specified if the arguments are written in a specific order (specified in the function’s documentation). The below code produces the exact same pyramid as above, because the function expects the argument order: data frame, age_group variable, split_by variable.

A more complex plot_age_pyramid command might include the optional arguments to:

For arguments specified with an equals symbol (e.g. coltotals = …), their order among the arguments is not important (must still be within the parentheses and separated by commas). 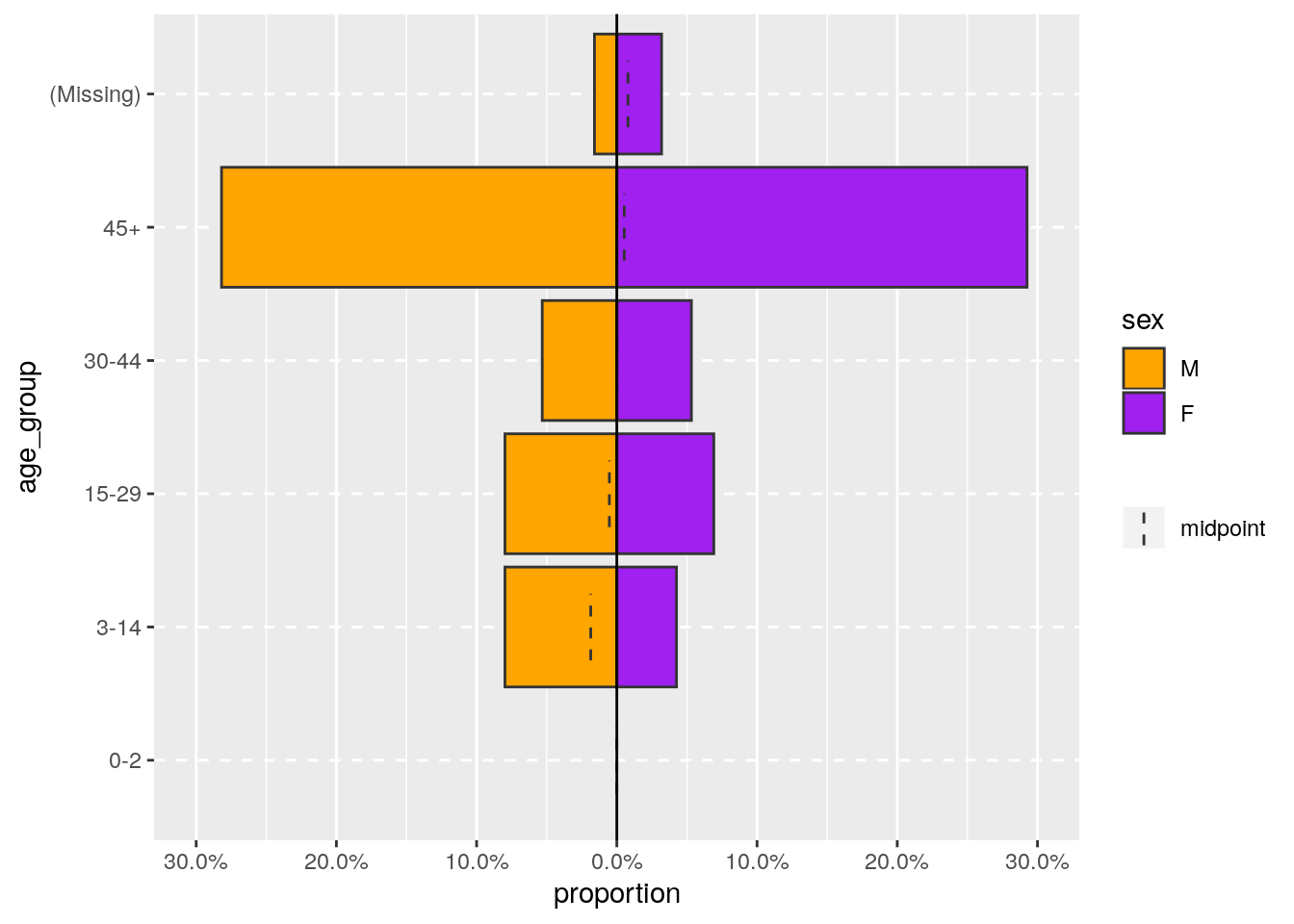 R comes with “base” functions, but the R community has created and verified many other specialized functions that are available to you. These functions are contained within packages that can be downloaded to your computer. Once downloaded, you access the functions within a package by calling the package with the library() command at the beginning of each R session.

Think of R as your personal library: When you download a package your library gains a book of functions, but each time you want to use a function in that book, you must borrow that book from your library.

For clarity in the templates, functions are often preceeded by the name of their package using the :: symbol in the following way:

The Pipe Operator (%>%) between functions

Within the template scripts you will see the pipe operator %>%. Simply explained, the pipe operator passes an intermediate output from one function to the next. You can think of it as saying “then”. Many functions can be linked together with %>%.

Piping is not a base function. To use piping, the dplyr package must be installed and loaded. Near the top of every template script is a code chunk that installs and loads the necessary packages, including dplyr. You can read more about piping in the documentation.

For example: The following code chunk from the AJD template data cleaning section can be read as “linelist_cleaned is defined as linelist_cleaned, filtered to remove the rows where the variables case_number and date_of_admission are missing”

Remember that even when using piping to link functions, if the assignment operator (<-) is present, the object to the left will still be over-written (re-defined) by the right side. In the code above, linelist_cleaned will be replaced by the new linelist_cleaned which likely has fewer observations.

To read more about a function, you can try searching online for resources OR use the Help tab in the lower-right R pane.