After cleaning the data, there are three sections of the template that produce tabular, graphic, and cartographic (map) analysis outputs.

This first section produces descriptive analyses about the patients demographics and attack rates.

The person analysis section begins with a couple sentences that contain in-line code - code embedded in normal RMarkdown text (not within an R code chunk). The second sentence in-line code inserts the number of males and females by counting the observations with “Male” and “Female” in the variable sex. Because our dataset’s variable sex contains M and F instead, we must modify this in-line code (or modify our variable) so the fmt_count() function is searching for the correct terms.

The first demographic table presents patients by their age group (the table’s rows) and their relationship with the case definition (the table’s columns). This chunk uses piping to link six different functions and produce a table (%>% is the pipe operator - see the R Basics Advanced and Miscellaneous page):

You can change the argument strata = to refer to any number of variables (in this next example, sex). To show proportions of the total population of observations, add the argument prop_total = specified as TRUE, as below.

You can also choose to exclude or edit the in-line code that gives a count of the missing cases by sex and age_group.

To print an age pyramid in your report, use the code below. A few things to note:

You can make this a pyramid of months by supplying age_group_mon to the age_group = argument. 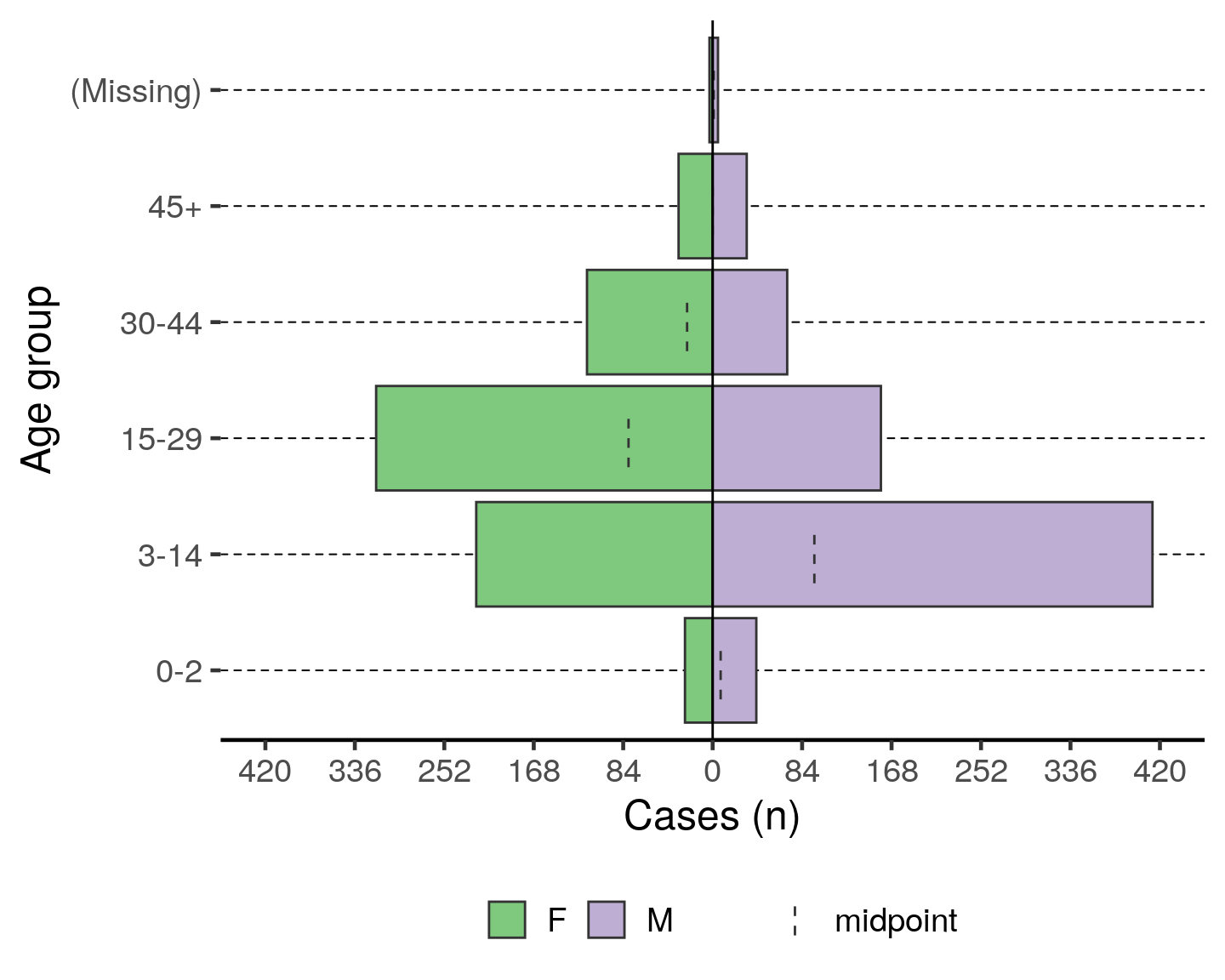 To have an age pyramid of patients under 2 by month age groups, it is best to add a filter() step to the beginning of the code chunk, as below. This selects for linelist_cleaned observations that meet the specified critera and passes that reduced dataset through the “pipes” to the next function: (plot_age_pyramid()). If this filter() step is not added, you will see that the largest pyramid bars are of “missing”. These are the patients old enough to not have a months age group.

If you add this filtering step, you must also modify plot_age_pyramid() by removing its first argument linelist_cleaned,. The dataset is already given to the command in the filter() and is passed to plot_age_pyramid() via piping. 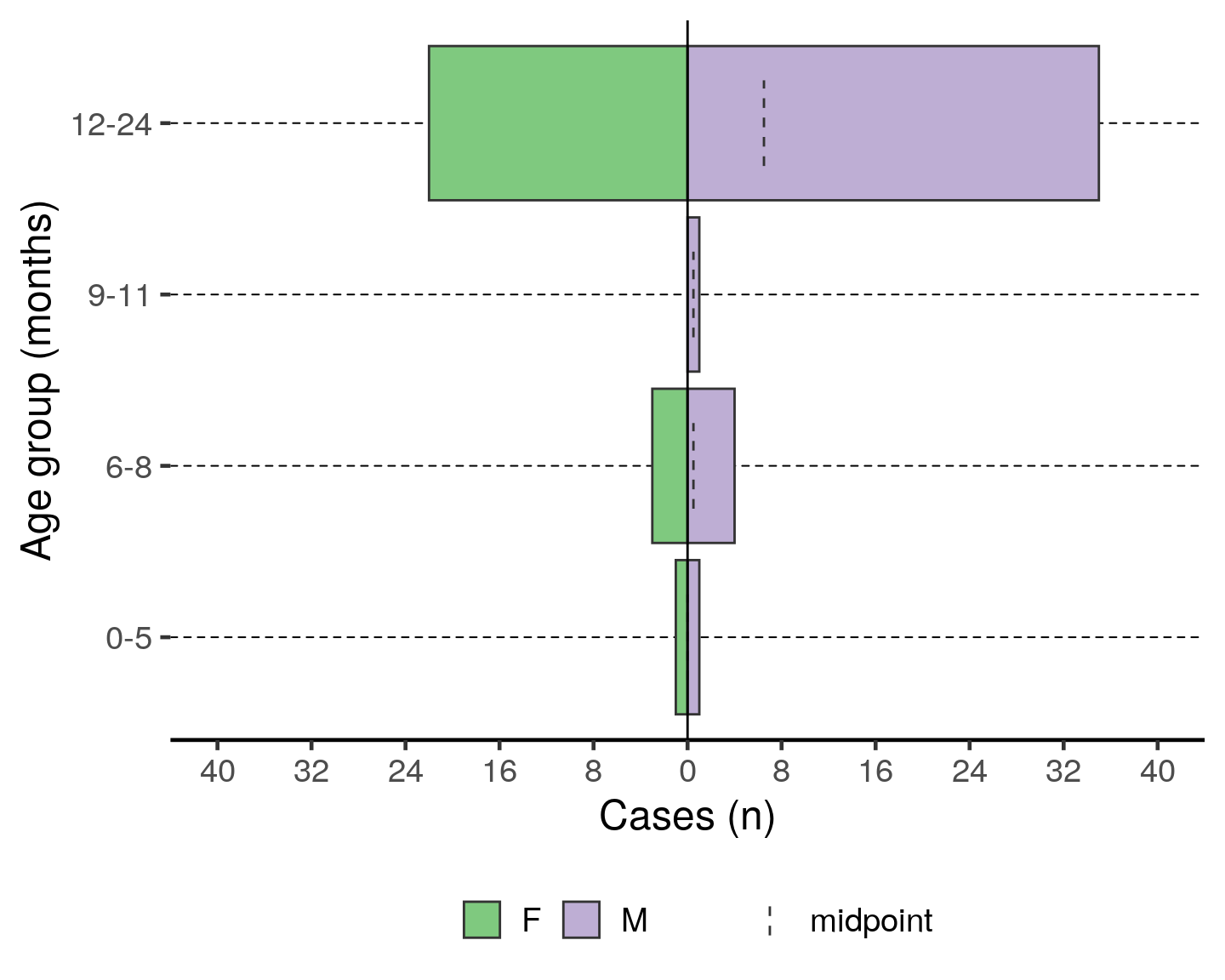 The text following the age pyramids uses in-line code to describe the distribution of outpatient and inpatient observations, and descriptive statistics of the length of stay for inpatients. The Am Timan dataset does not have length of stay, so it is best to delete those related sentences related to obs_days for the final report.

This next code also uses the tab_linelist() function to create descriptive tables of all the variables that were included in the SYMPTOMS variable list.

The code for the lab table is very similar, but has this difference:

This table may be large and unwieldy at first, until you clean your data. The step in data cleaning where we converted 0, 1, “yes”, “pos”, “neg”, etc. to standardized “Positive” and “Negative” was crucial towards making this table readable. Once knitted into a word document, you will likely need to adjust the font size, column widths, etc.

Likewise, the code section on time-to-death does not apply to our dataset and should be deleted.

Overall CFR is produced with the code below. Note the following:

The next code adds arguments to case_fatality_rate_df() such as group = sex (which stratified the CFR by sex), and add_total = TRUE (which makes a total row across the sex groups).

When creating a table of CFR by age groups, one additional step, using the function complete() is required to ensure that all age_group levels are shown even if they have no observations.

The commented code below examines CFR by case definition. Note that this is dependant upon our working case_def variable.

Running the correct command and printing the value of population, we see that the sum population across regions is estimated to be 62336.

The first line of code below creates a multi-part object ar with the number of cases, population, attack rate per 10,000, and lower and upper confidence intervals (you can run just this line to verify yourself). The subsequent commands alter the aesthetics of to produce a neat table with appropriate column names.

We are unable to calculate the attack rate by age group, because we do not have population counts for each age group. Comment out (#) this code.

Mortality attributable to AJS is also not appropriate for this example. Comment out (#) the 4 related code chunks.