The final section of the template produces tabular analysis outputs related to place. If you have shapefiles for your situation, you can also produce maps.

To get a basic descriptive table of cases by region (which in our case was originally the variable quartier from the raw linelist), we use tab_linelist() on the variable patient_origin, with columns by patient_facility_type (inpatient, outpatient, or missing).

To get a descriptive table by patient outcome we set strata = exit_status2. We can also restrict the analysis to inpatients only by inserting the function filter() into the first argument of tab_linelist. tab_linelist() expects a data frame for it’s first argument, and it receives the filtered linelist_cleaned - this is an example of “nested”" functions (one function inside another).

A table of attack rates by region may be useful

First, like when we calculated attack rate by epiweek in the time_analysis section, the cases are counted by patient_origin. This list of counts is then joined to the imported population data for each region joined by patient_origin (the name of the region/quartier). These data are stored in the object cases.

The ar object saves the counts, population, and attack rate calculations along with modified column names.

Finally, the table is created with kable() and displayed.

You could then also plot this on a bar chart with confidence intervals.

There are many quartiers without population denominators that will make the graph difficult to read. Thus, we modify the code by filtering ar_region to remove these using the opposite (!) of the is.na() function (see Operators R Basics page). Now any quartiers with missing denominators will not appear in the graph. 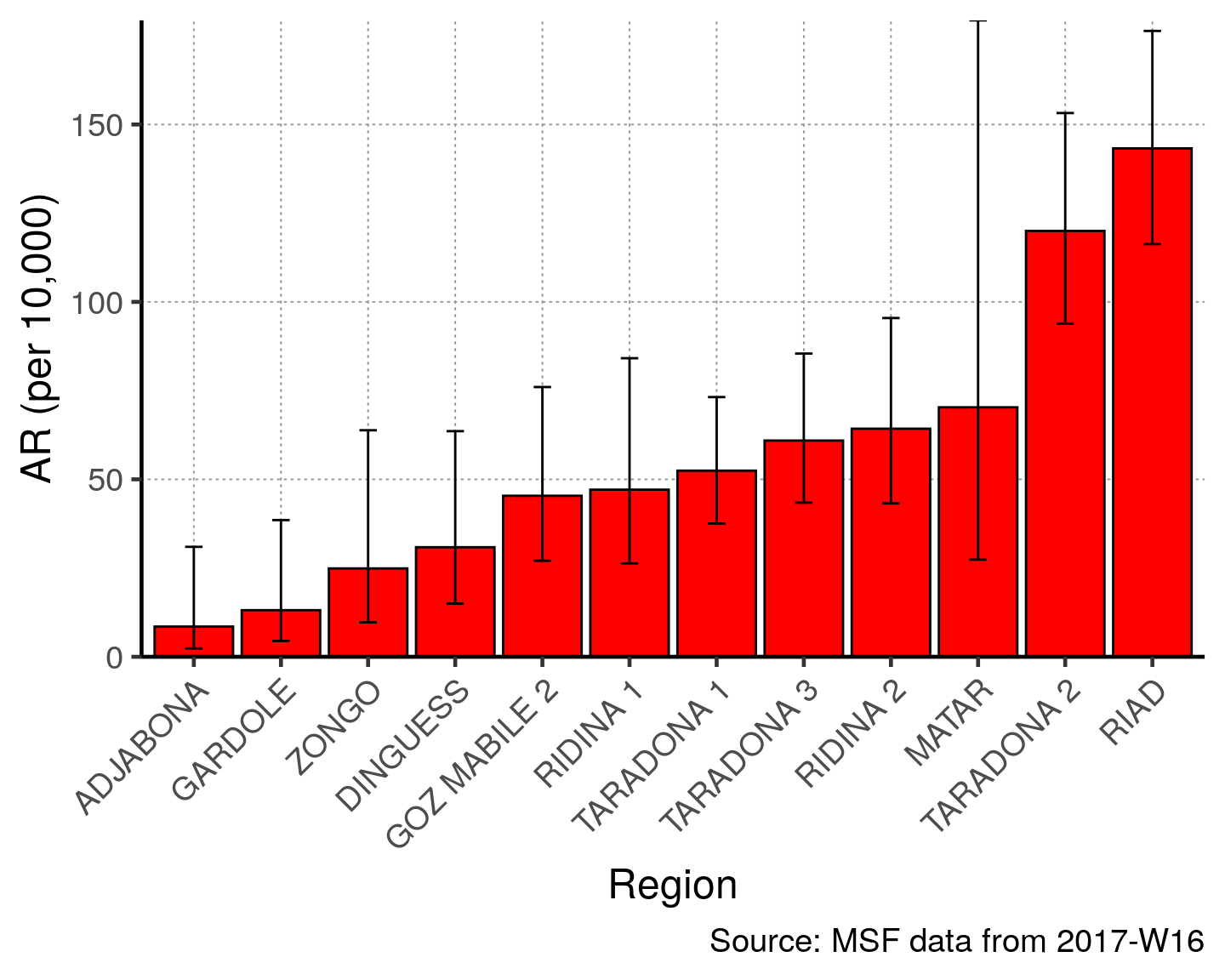 You could also table mortality rate by region. A few things to note:

Mapping in R can be intimidating at first because it is different than ArcGIS, QGIS, or other mapping software that primarily use a point-and-click interface. However, you will see that using commands to create maps can be much faster, more replicable, and transparent for whomever you share code with.

We do have shapefiles for the Am Timan exercise. You can download them from the case study overview page of this website.

A shapefile is actually made of several files. Viewing the shapefile in your computer’s internal folders you will often see 4 or 5 files with the same name but different extensions (e.g. .shp, .prj, etc.). As long as these files are located in the same folder the shapefile will load correctly when you import with the .shp extension.

Because we have shapefiles for this exercise, we must delete the command that generates the fake shapefile (map <- gen_polygon(regions = unique(linelist_cleaned$patient_origin))).

Note the checklist for using shapefiles:

When giving the name of a shapefile to here(), list the file name with a .shp extension.

The next code will check the coordinate reference system (CRS) of the shapefile, as it was read-in. In our exercise, we see an EPSG code of 4326, which is the correct code for WGS84 (you can also see below the EPSG code that the datum is WGS84).

If there is no CRS specified for your shapefile, you can set the CRS to WGS84 with the following command, which uses the EPSG code of 4326.

Below we explain each step within the this code chunk, plotting a map based on the attack rate table.

Create a categorical variable of the attack rate. These categories will appear in the map as the legend - and the regions will be colored by these groups.

Join the object map (shapefile) to ar_map (a data frame). The spatial object map is joined to the data frame ar_map with a left join (see the Advanced R Basics page to learn more about joins). Both of these objects contain tables (you can click them in the Environment pane to see this). In the command, they are linked by the Name variable in ar and the Region variable in map.

You may need to modify your code so that the join occurs on Name in the object map, and not name.

Make sure you modify your left_join code to use “Name” with a capital N, as that is how the variable is spelled in the object ‘map’. In your other data these variable names may be completely different and must be changed

The resulting object mapsub is a product of this left join. A left join will include all values from the Left-hand Side (LHS) and only inlcude values from the Right-hand Side (RHS) if they match to LHS values. Now, the attack rates are joined to the region names and to their GIS geometries. You can verify this by Viewing the object mapsub (click on it in the Environment pane).

Now, ggplot() is used to create the map. Remember that ggplot() subcommands must be connected by plus symbols at the end of each line (+) (except the last line). Read more about ggplot2 and ggplot() in the Advanced R Basics page.

geom_sf() identifies mapsub as providing the data for the map, and filling the polygons by values in the variable categories.

coord_sf() set to NA prevents gridlines from being drawn on the map.

annotation_scale() adds a scalebar at the bottom of the map.

scale_fill_brewer() uses a color palatte from orange to red (“OrRd”), keeps all color levels even if there are no polygons at that level (drop=FALSE), and specifies a title for the legend. If you want a different color scale, use this code from the package RColorBrewer to see the possible options (hint: after running this code click “Zoom” in your Plot/Viewer pane to see more clearly). Then replace “OrRd” with your desired code. You can read more about colors here. 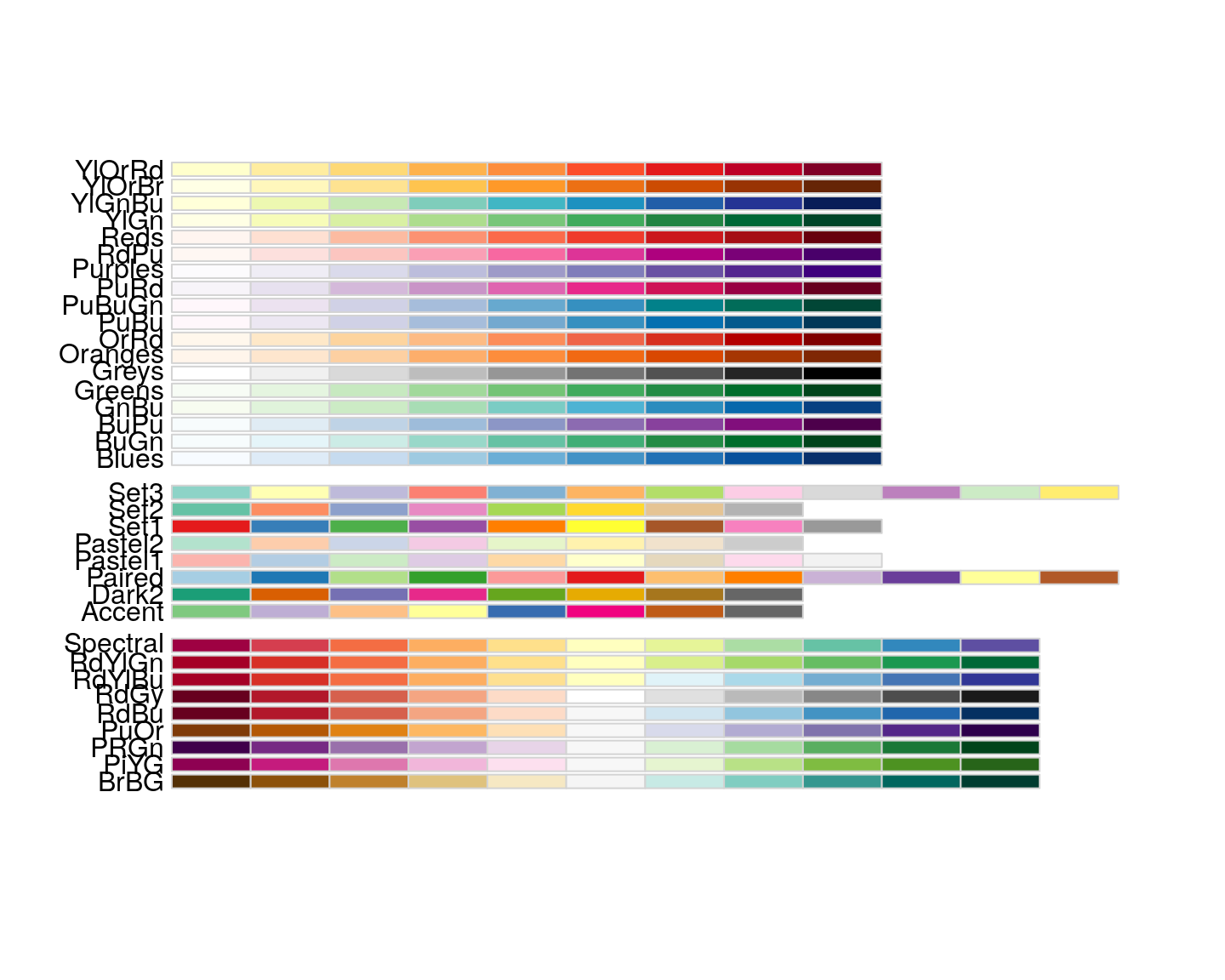 geom_sf_text() specifies labels for the polygons, including which variable to use for labels (Name), and the text colour. Again, we need to modify this ggplot() reference to the variable “name” to now reference “Name” with a capital N. In your other data the variable may be completely different.

theme_void() specifies a theme for the map that does not include coordinates or axes. 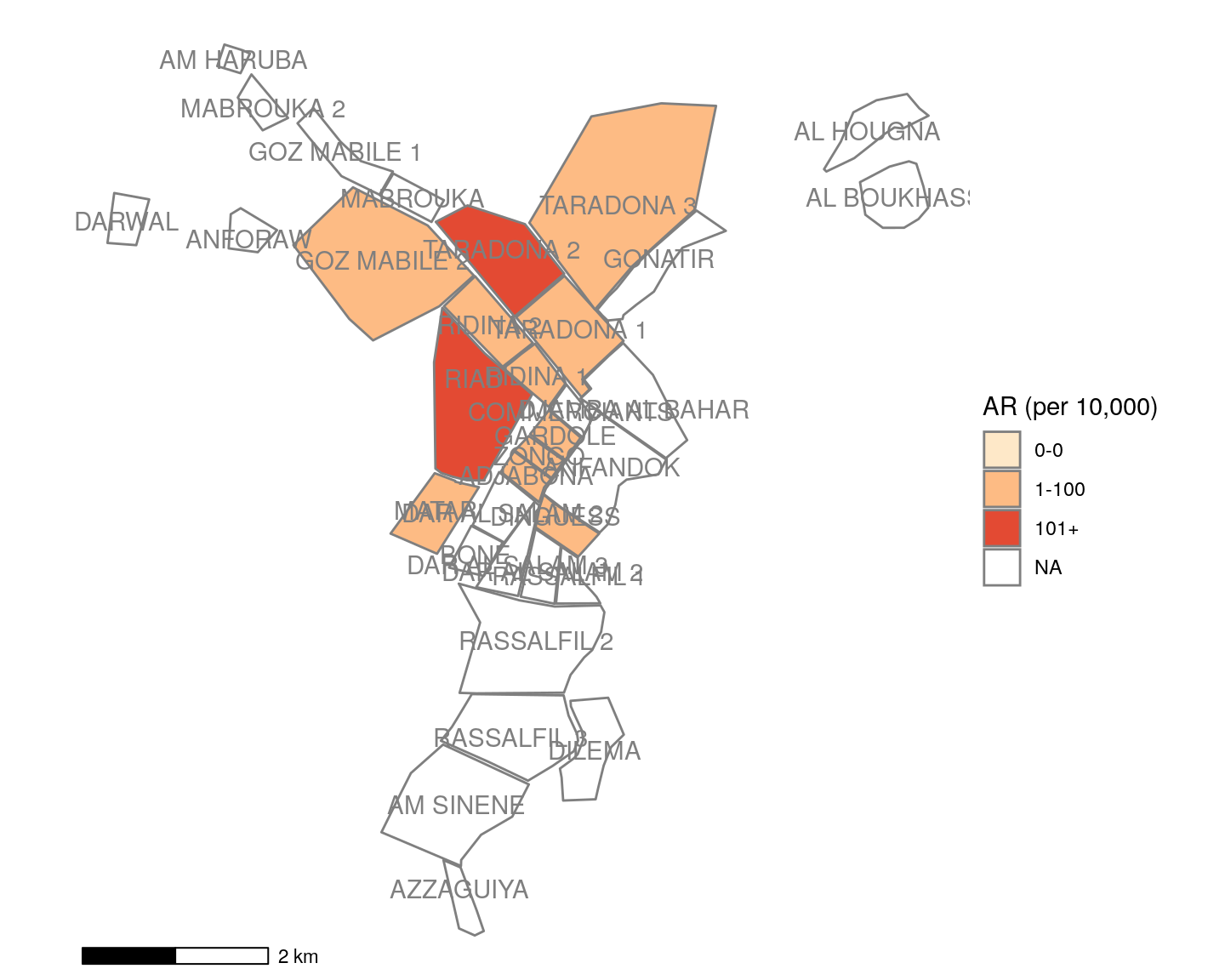 You can use this alternative to make the labels not overlap.

ggrepel() arranges point/polygon labels so they do not overlap and are easier to read. You can see more examples of ggrepel() in this vignette 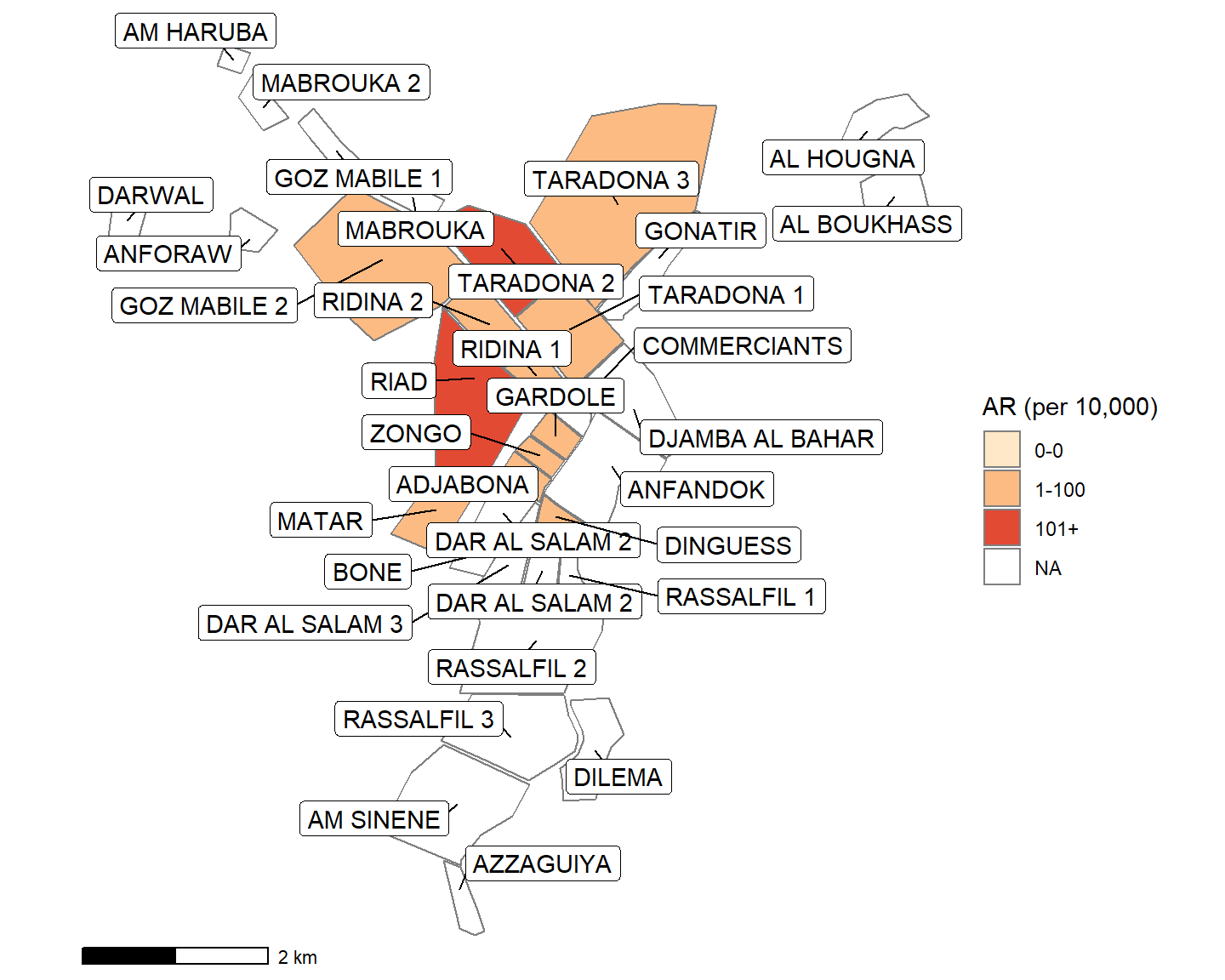 Lastly, there is an efficient way to create attack rate maps and bar plots of incidence for each epiweek. Use a “for loop” to run the same code for every epi week.

A “for loop”" is used to iterate over (perform the same actions to) every value in a vector. In this case, we want to make the map and bar chart for each region. You can read more about for loops in the R Basics - Advanced and Miscellaneous page, or this tutorial.

A few things to note about this chunk:

The barplots can be limited to quartiers with non-zero attack rates with the following code:

And here is the complete code:

Note: Only results for the first 20 epiweeks are shown. Also, the barplots are filtered to only show quartiers with non-zero attack rates. 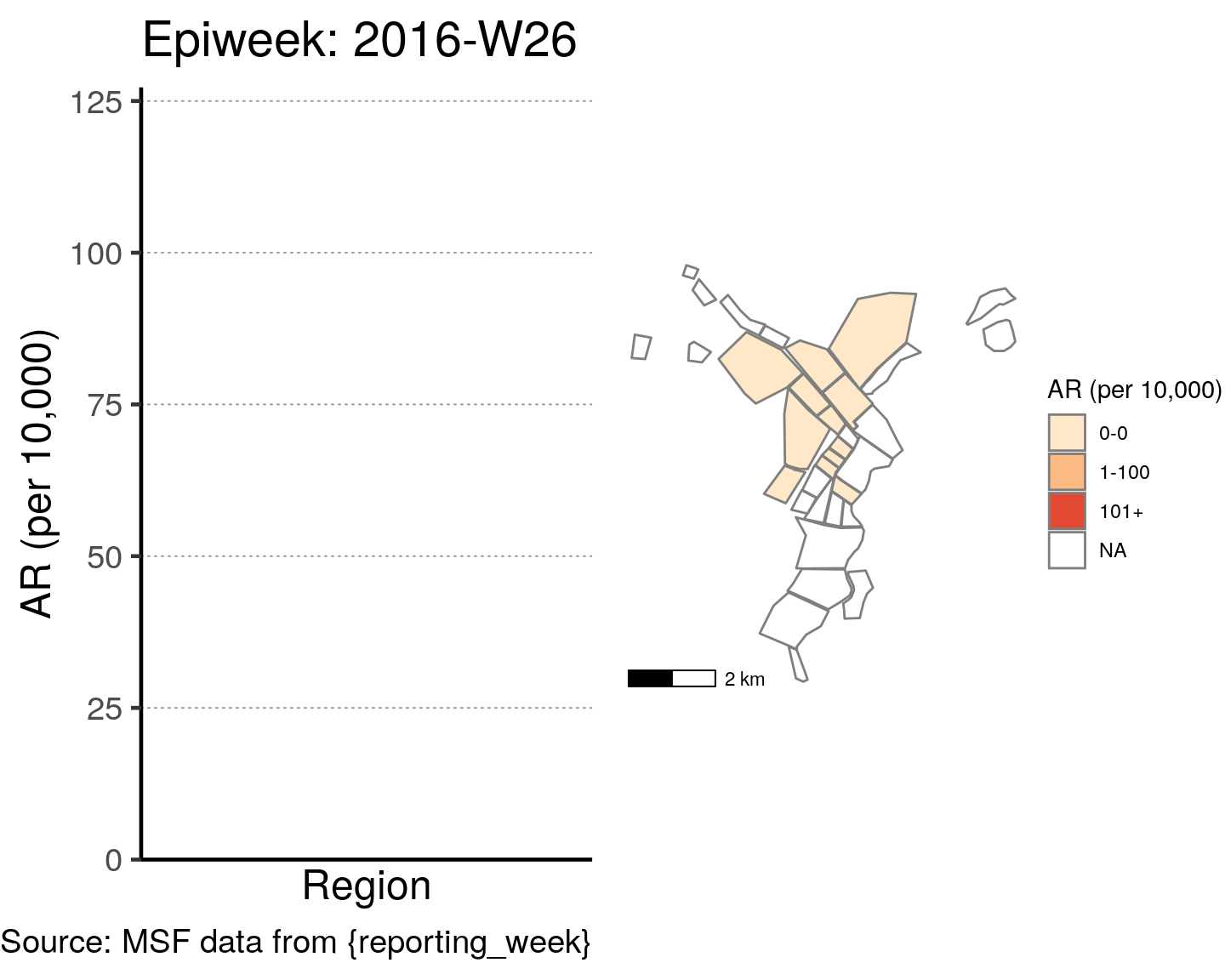 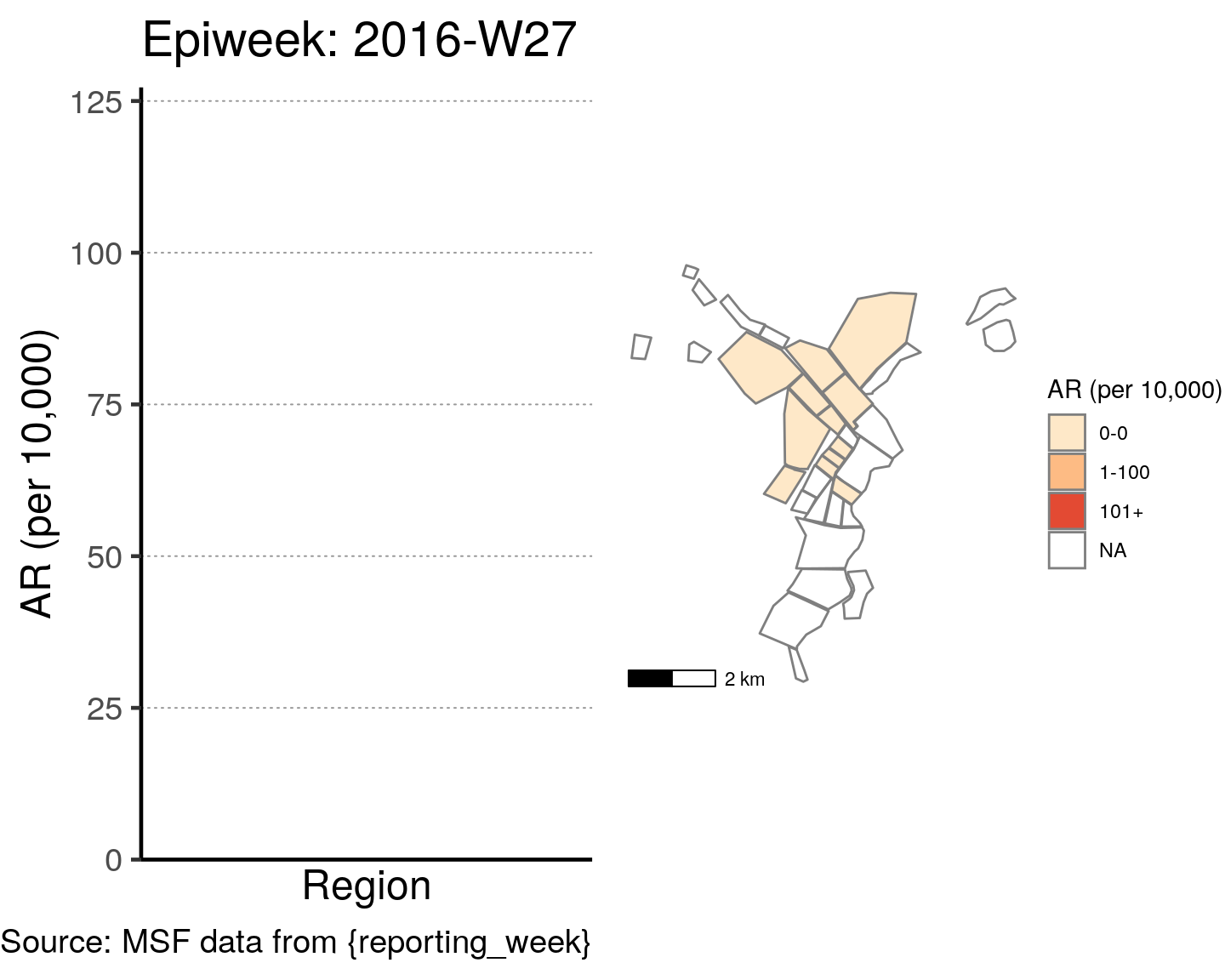 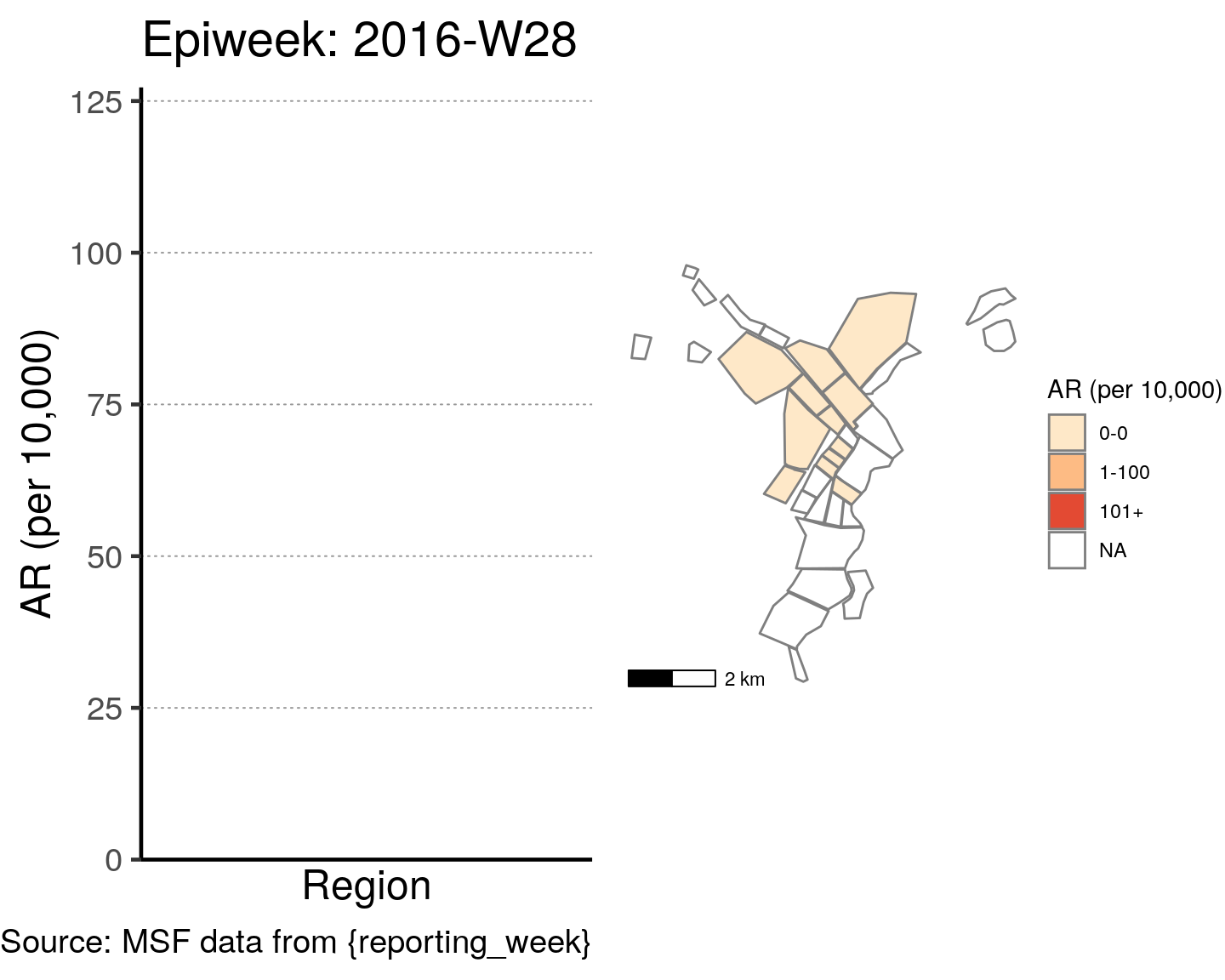 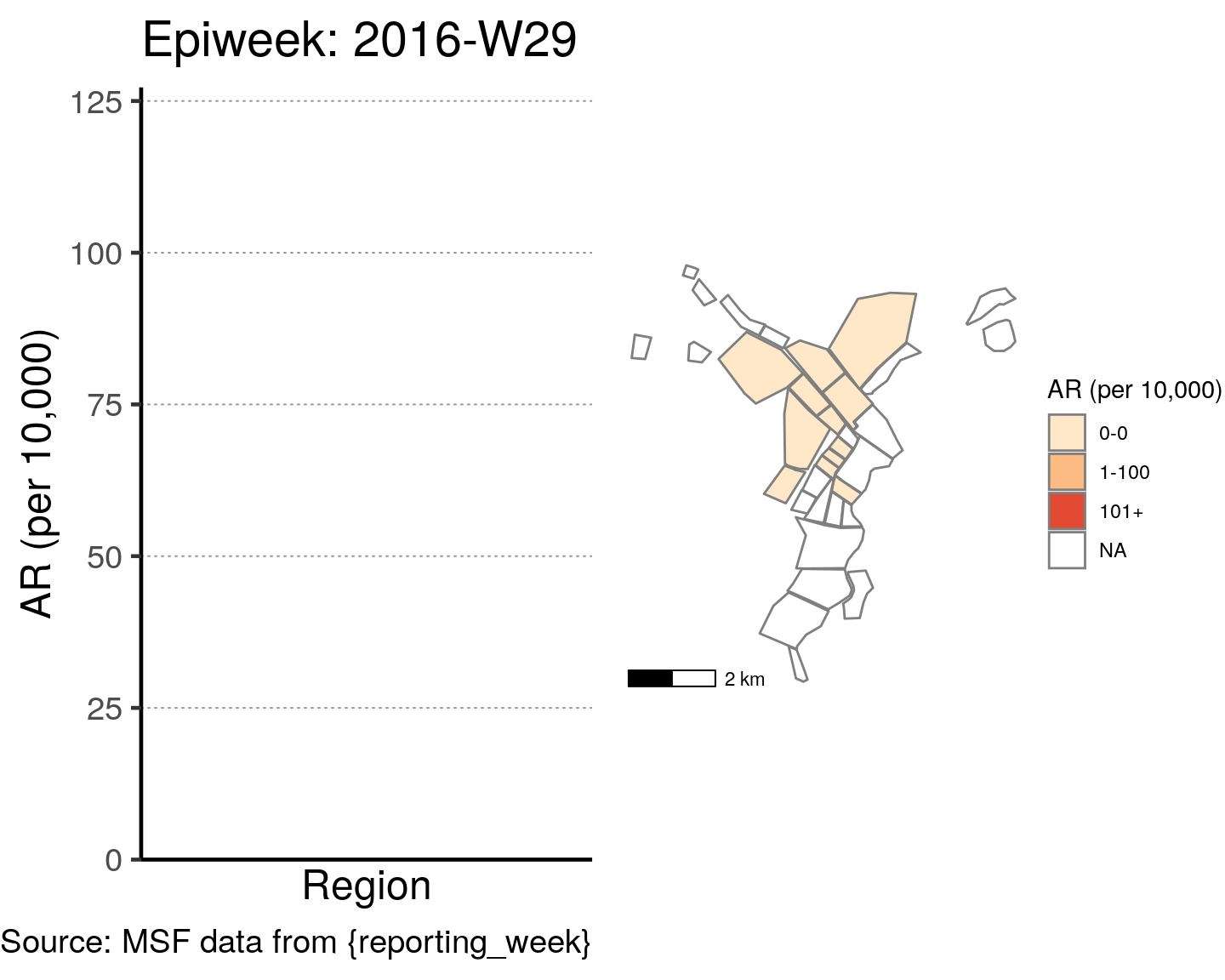 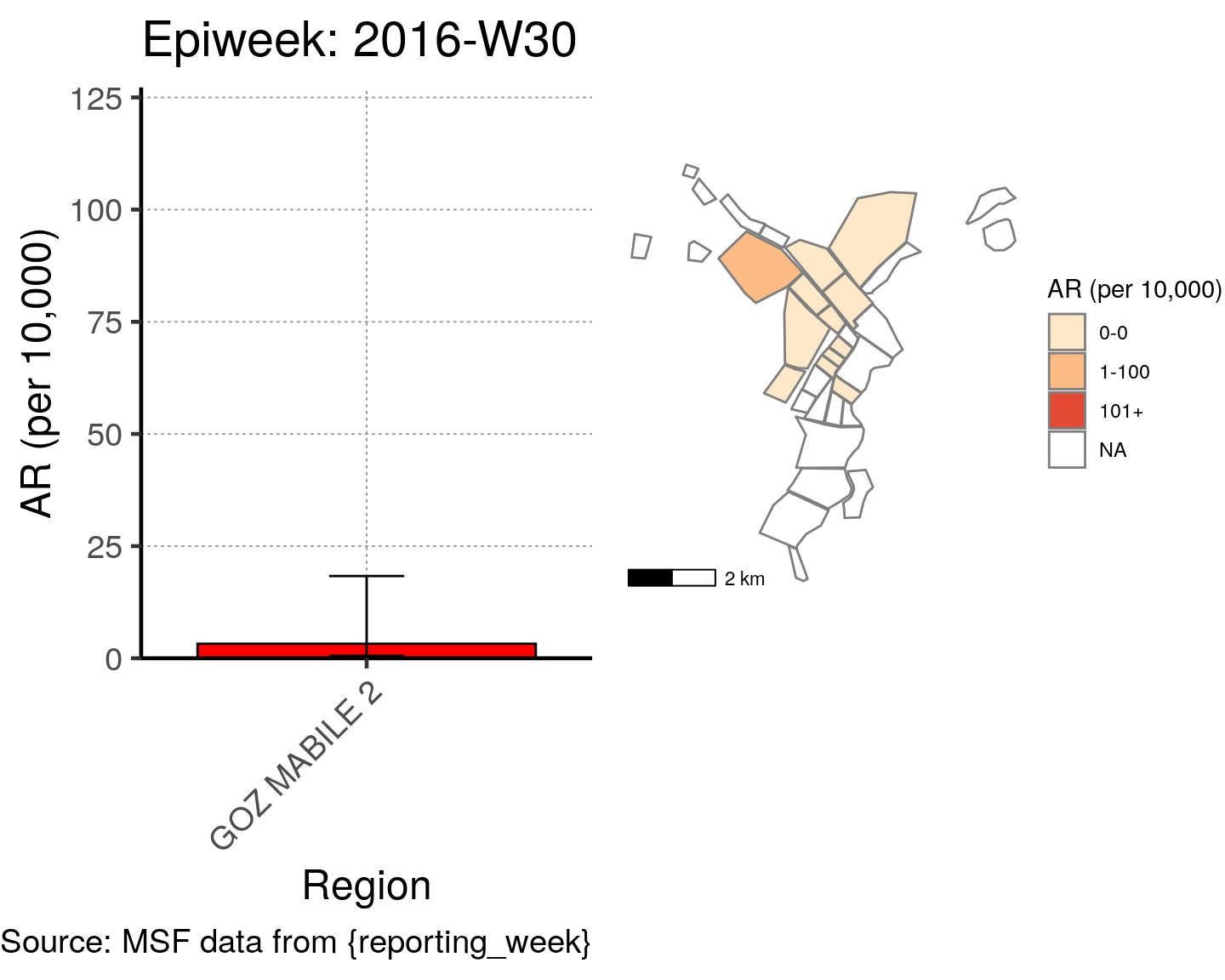 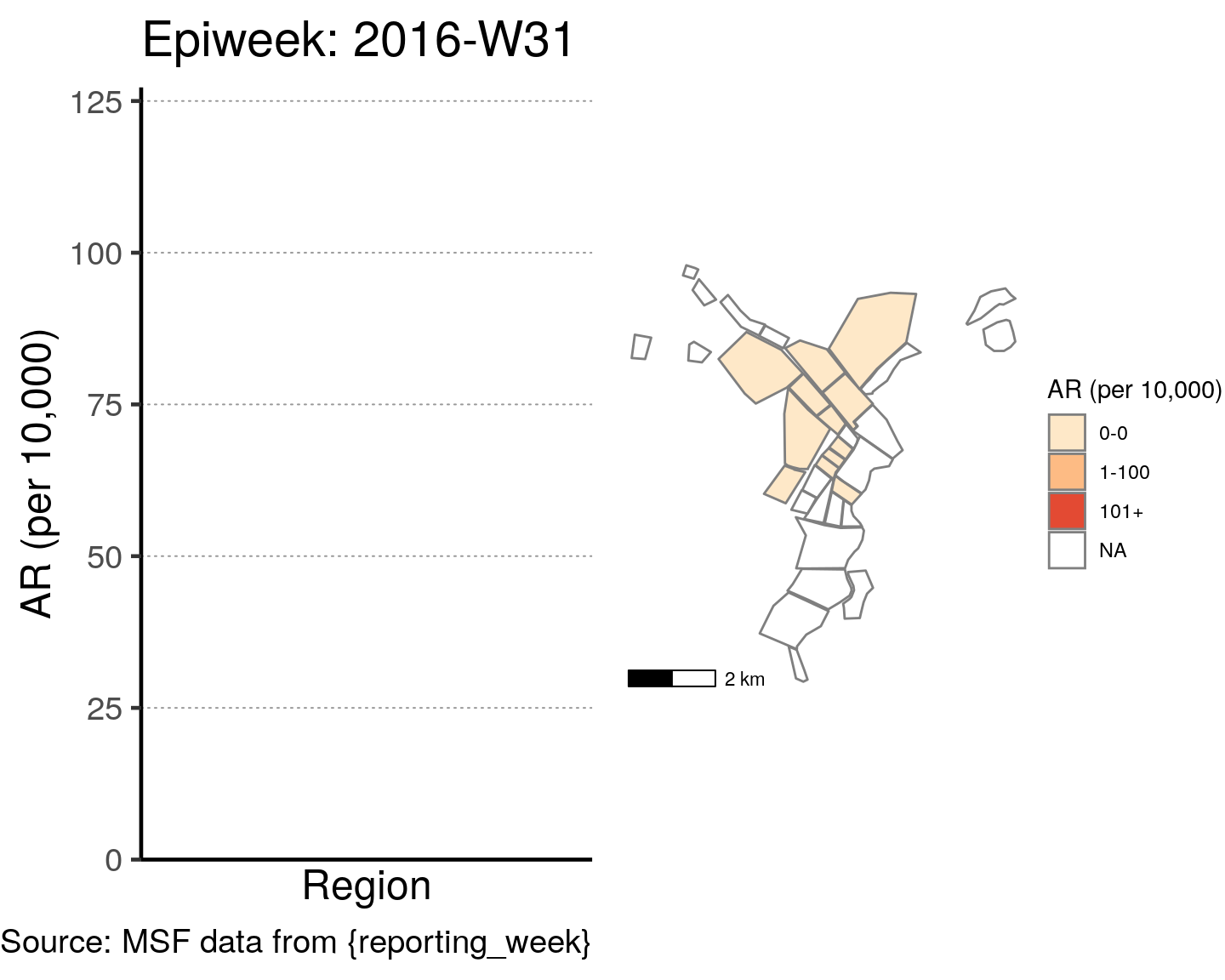 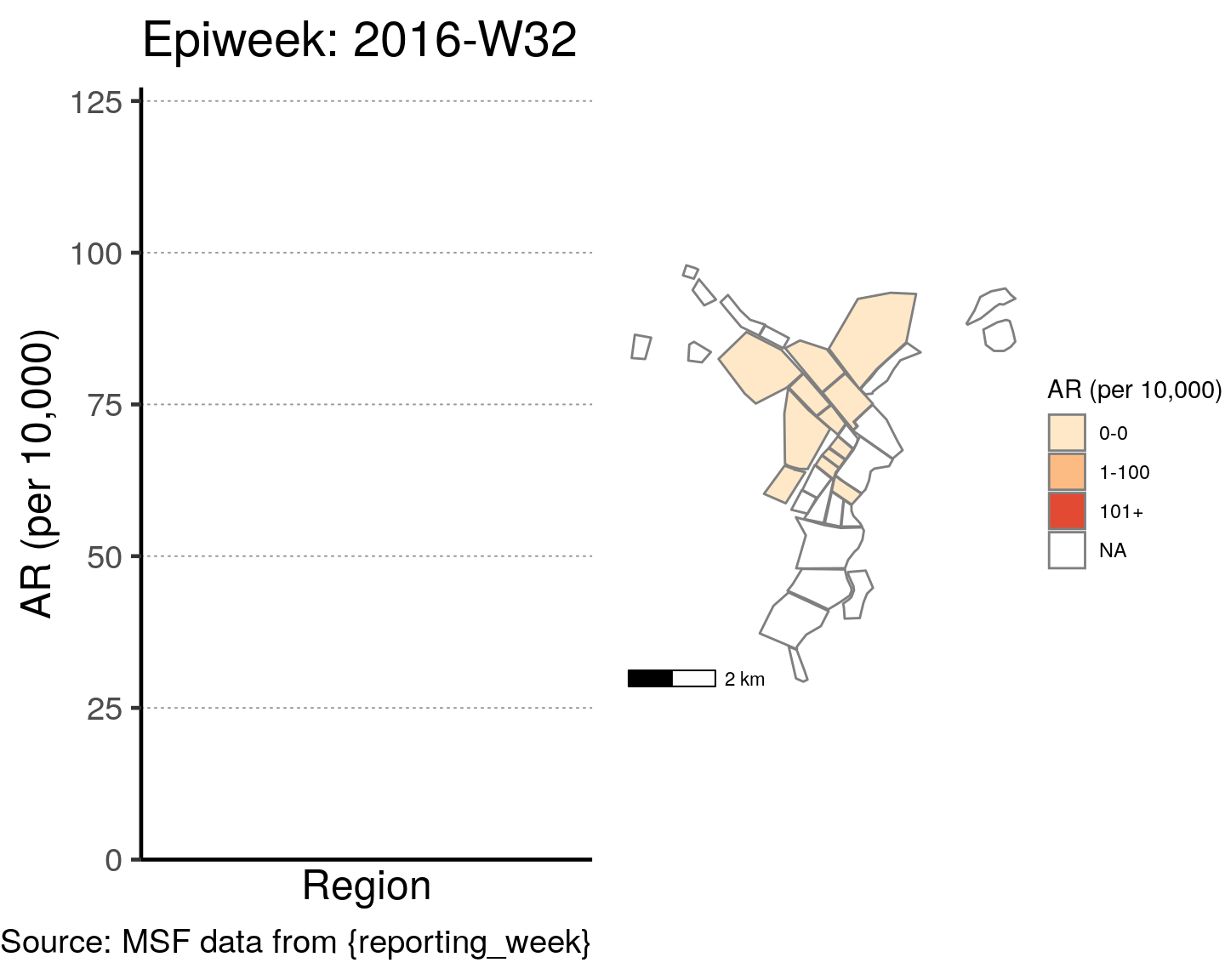 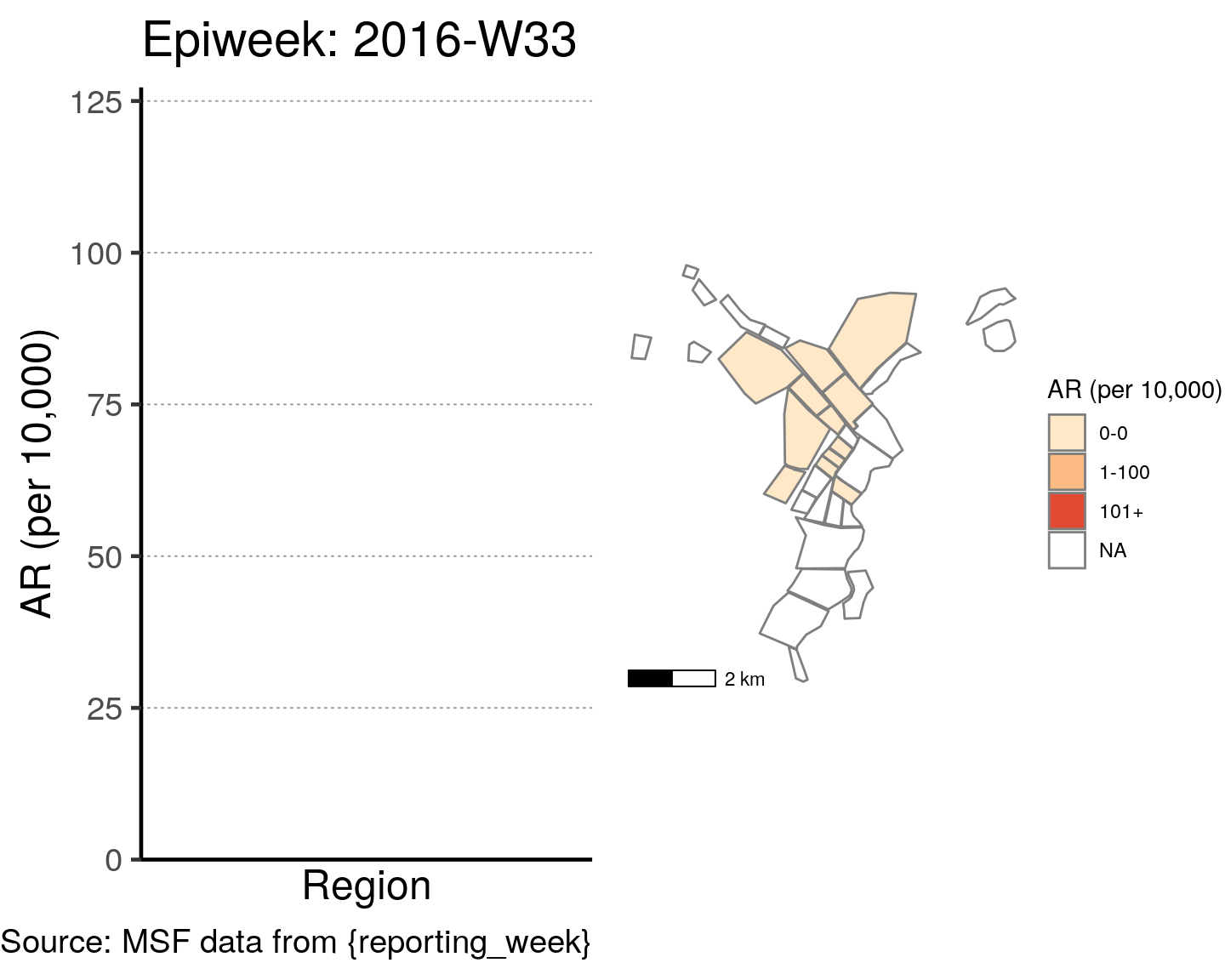 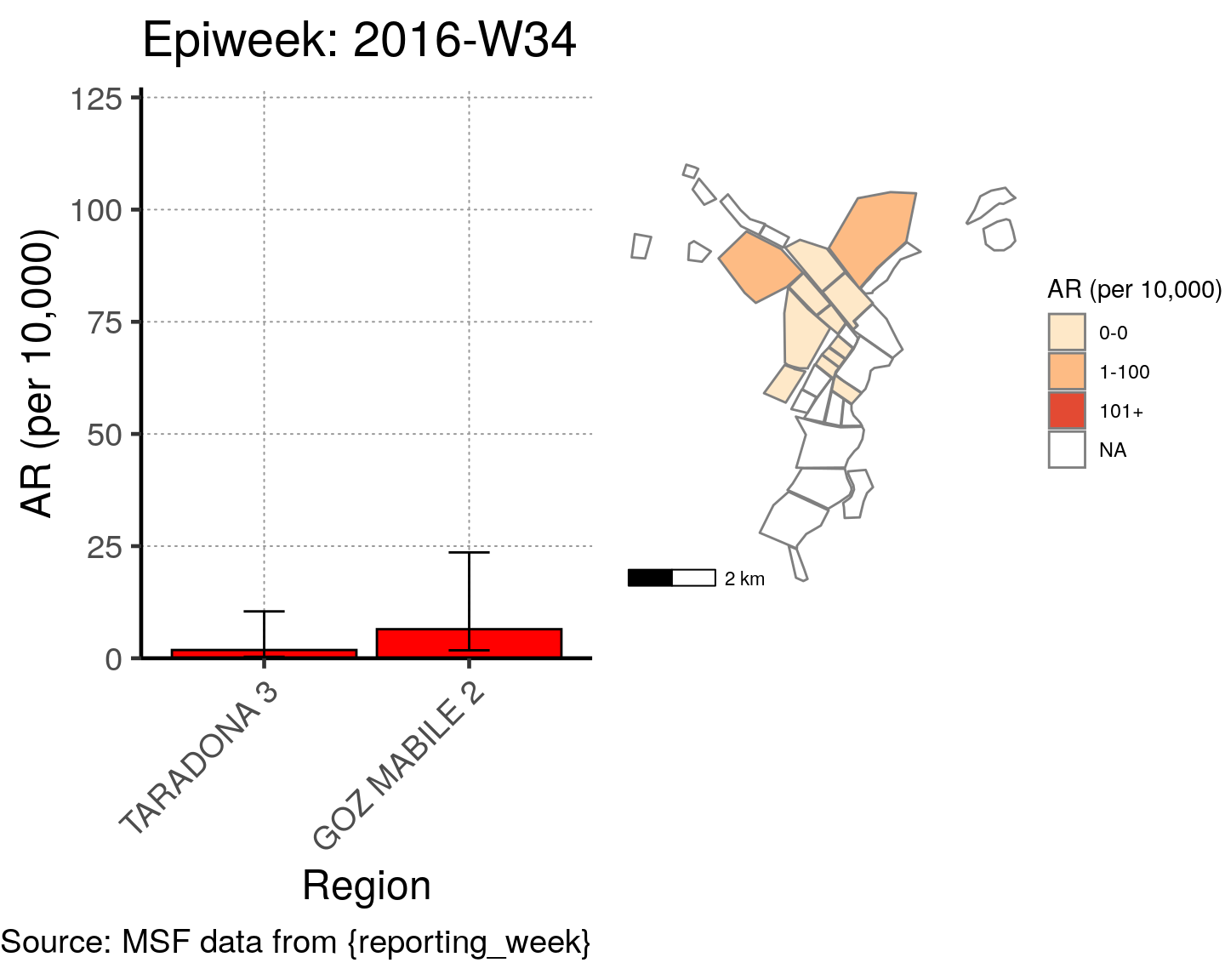 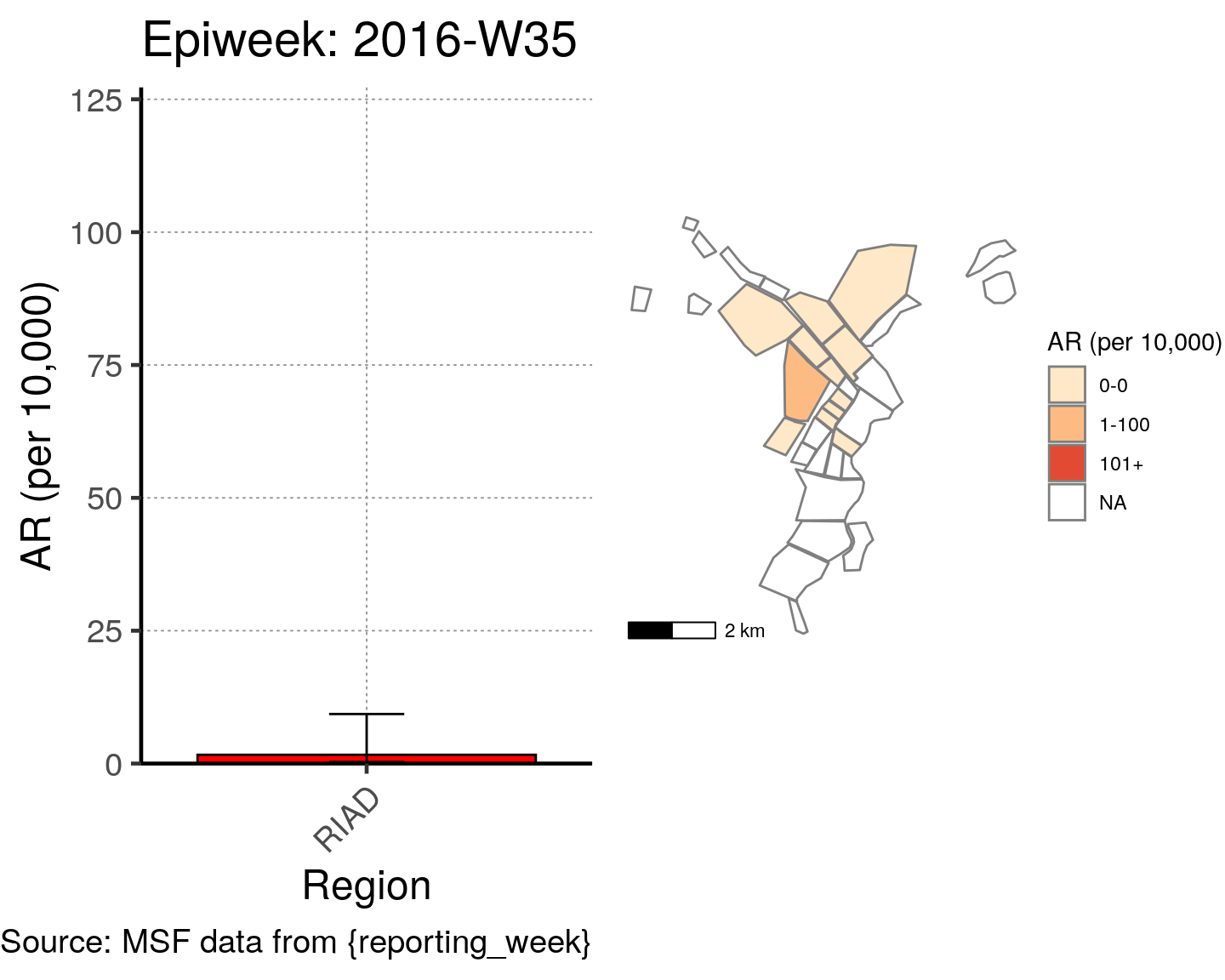 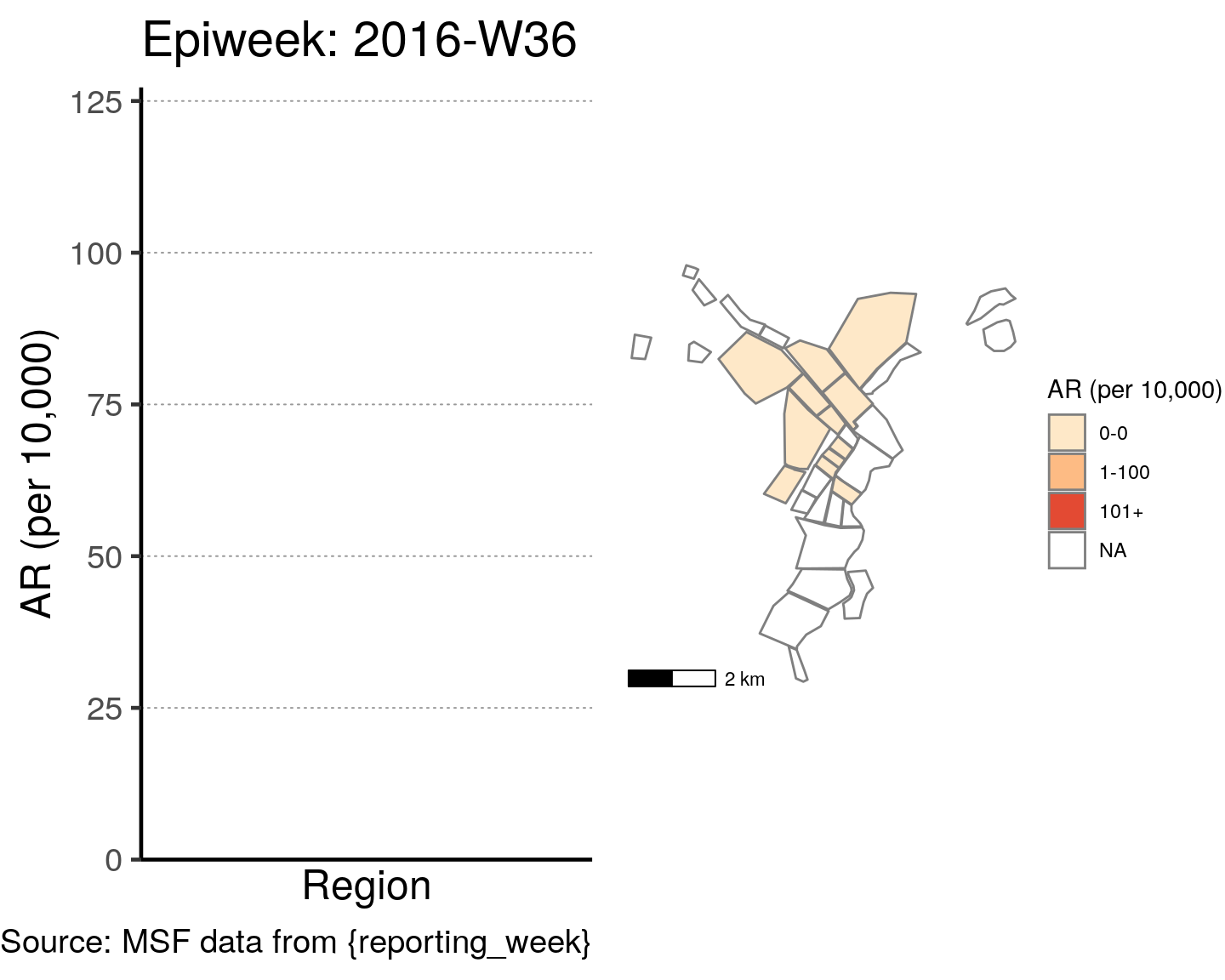 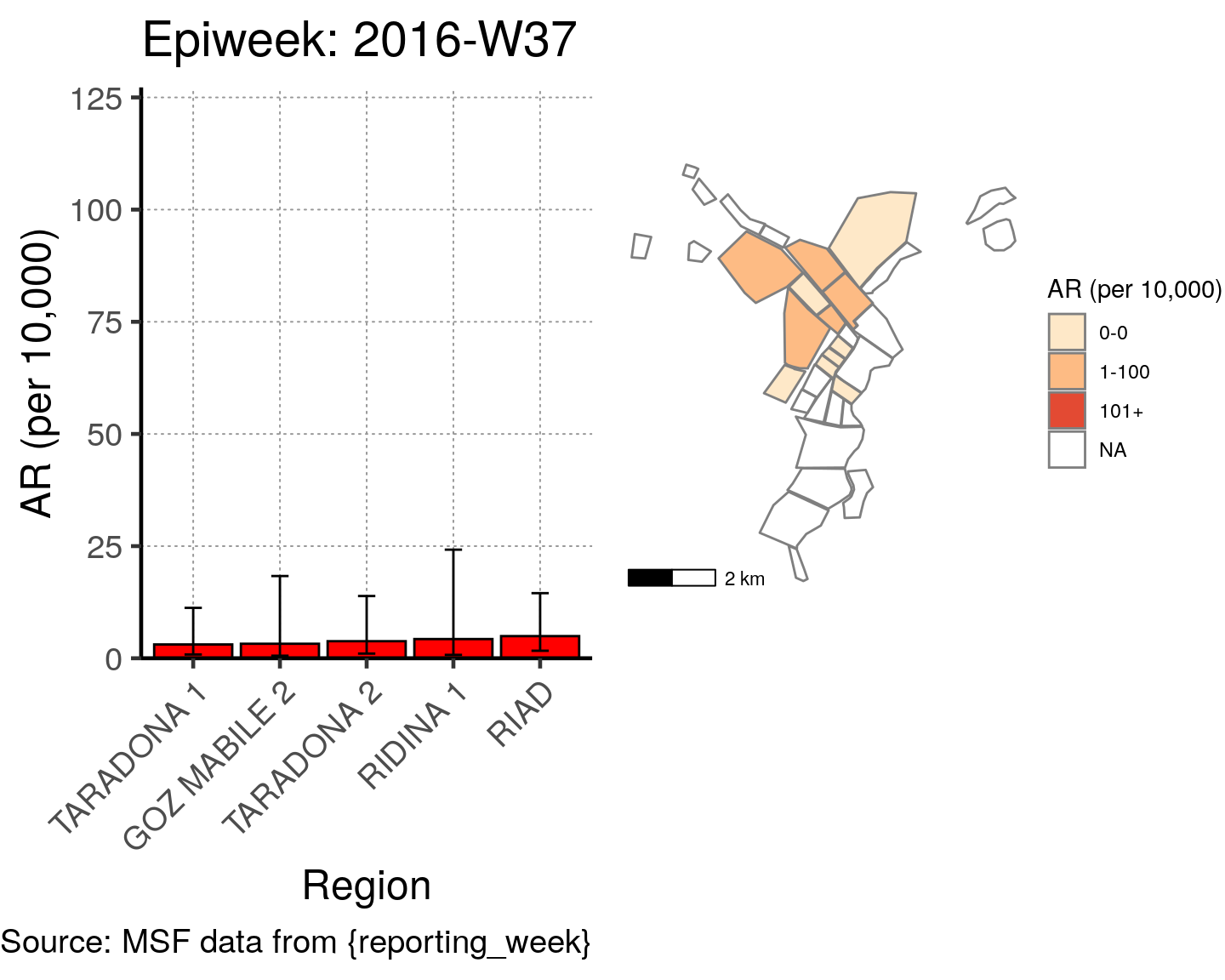 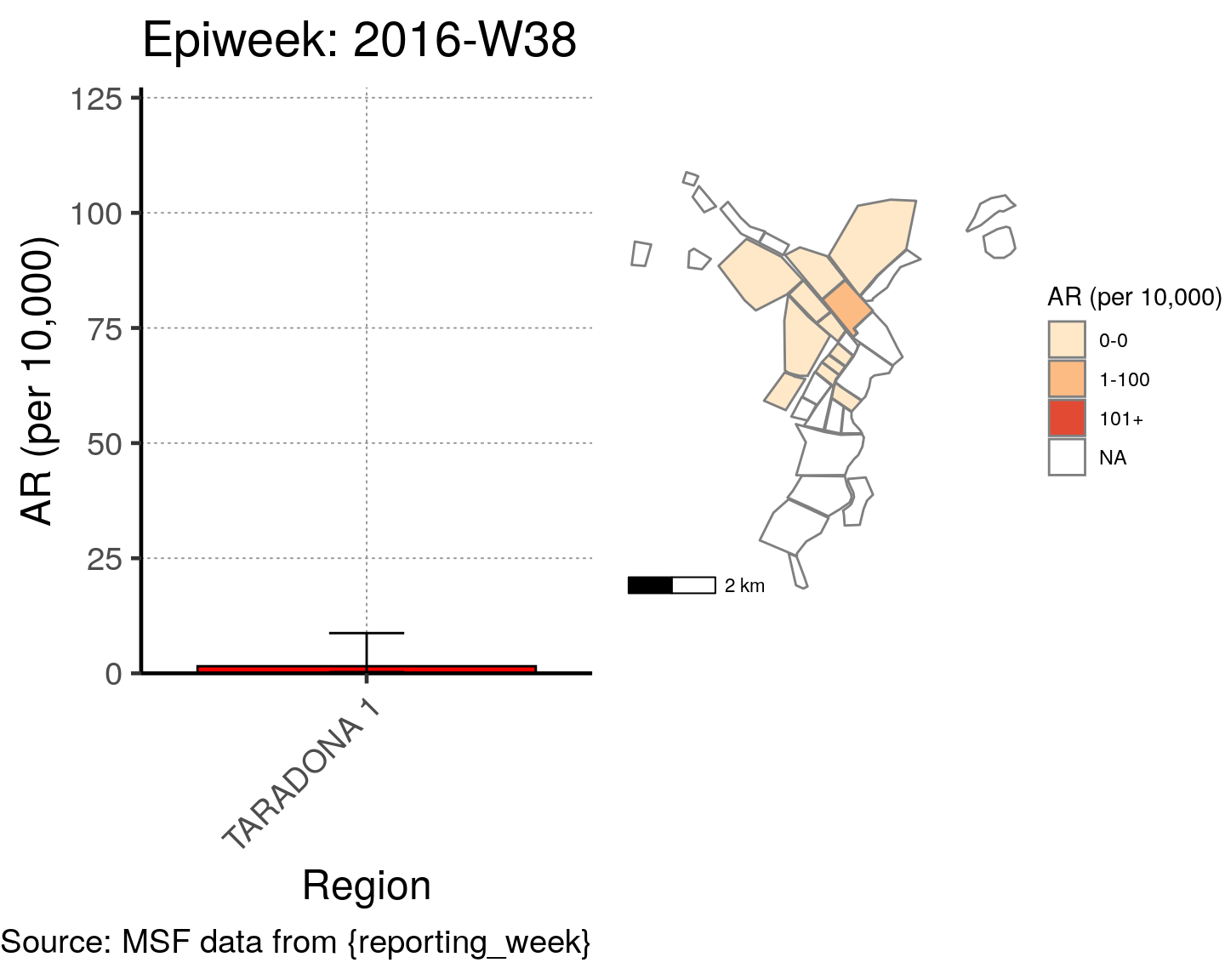 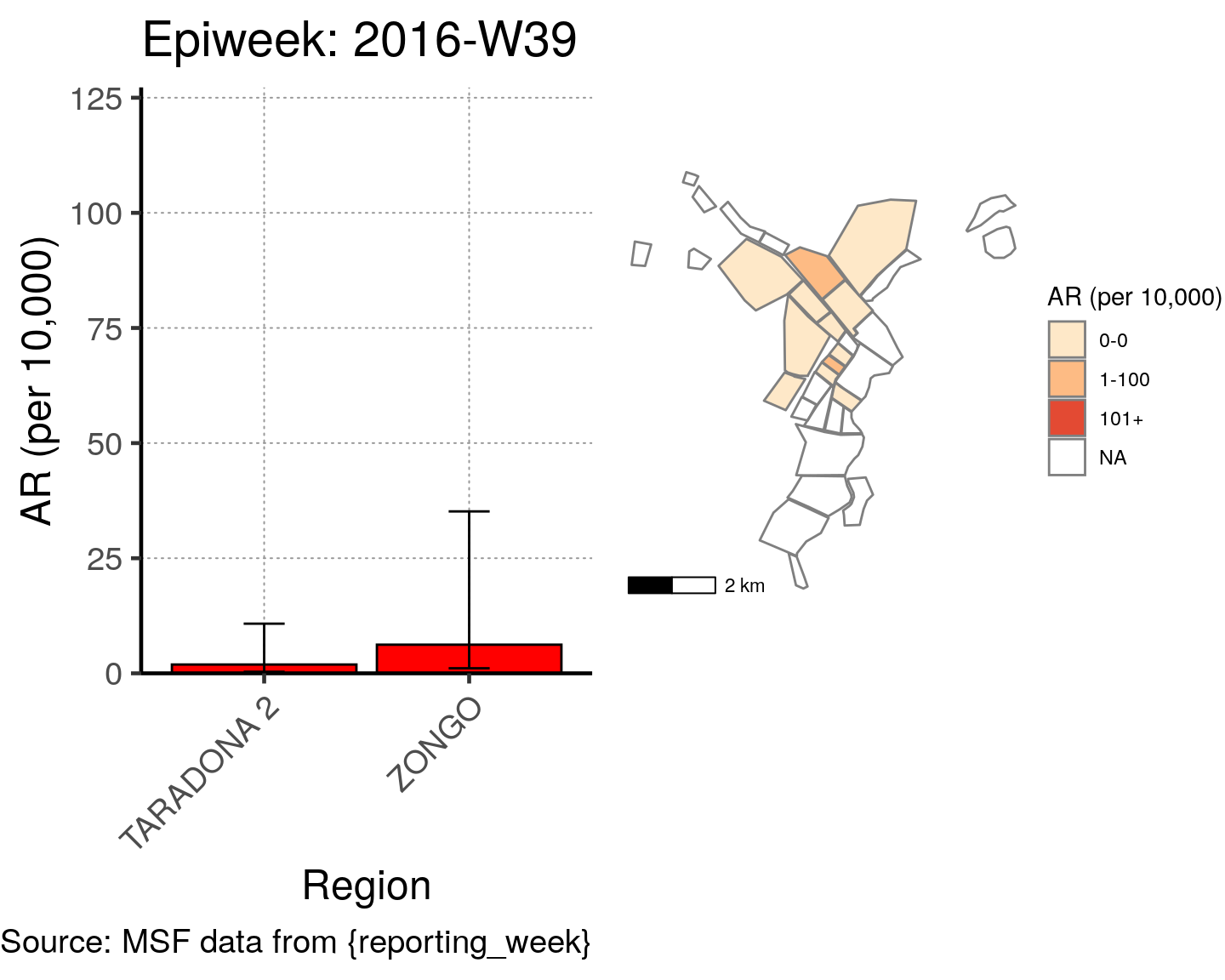 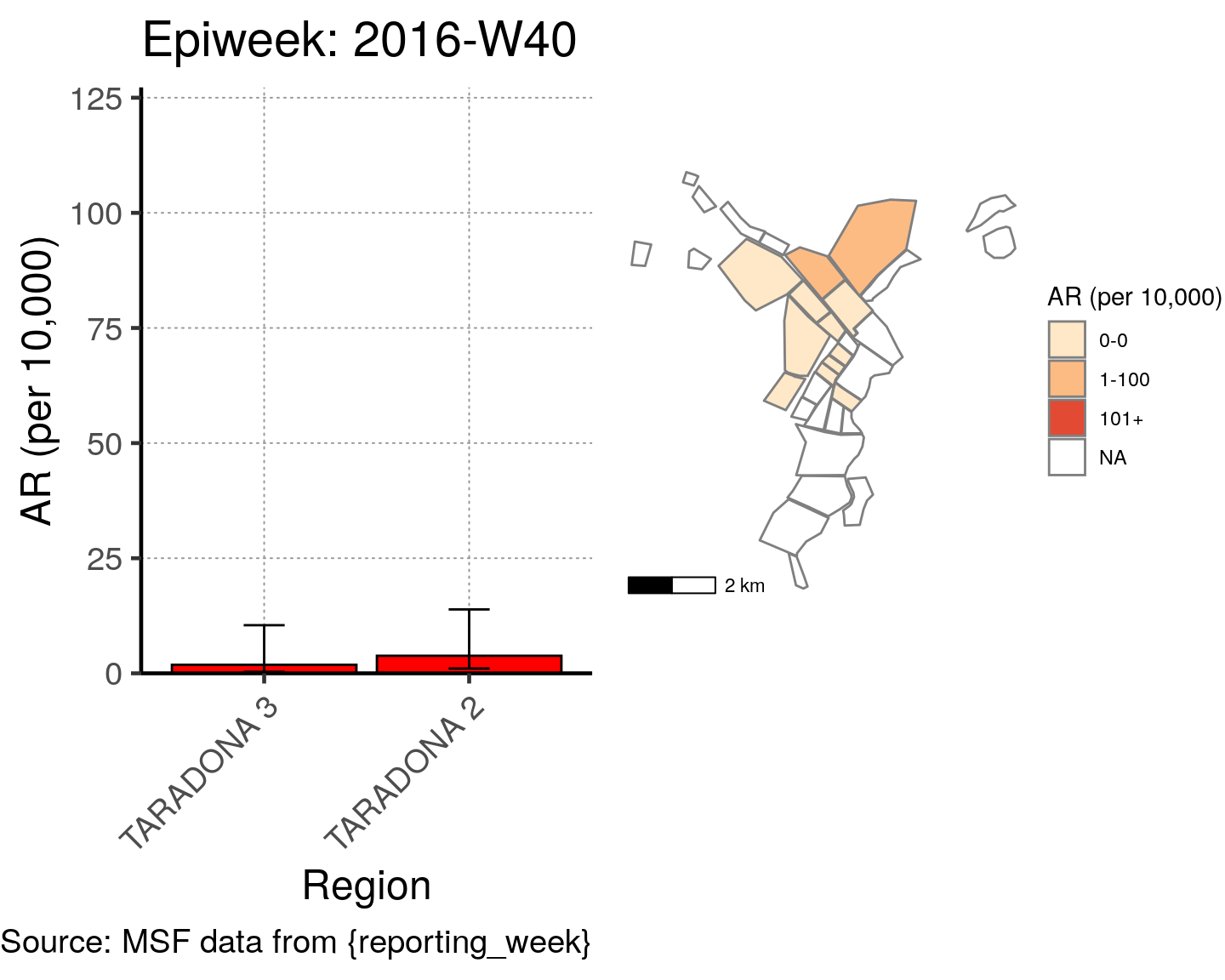 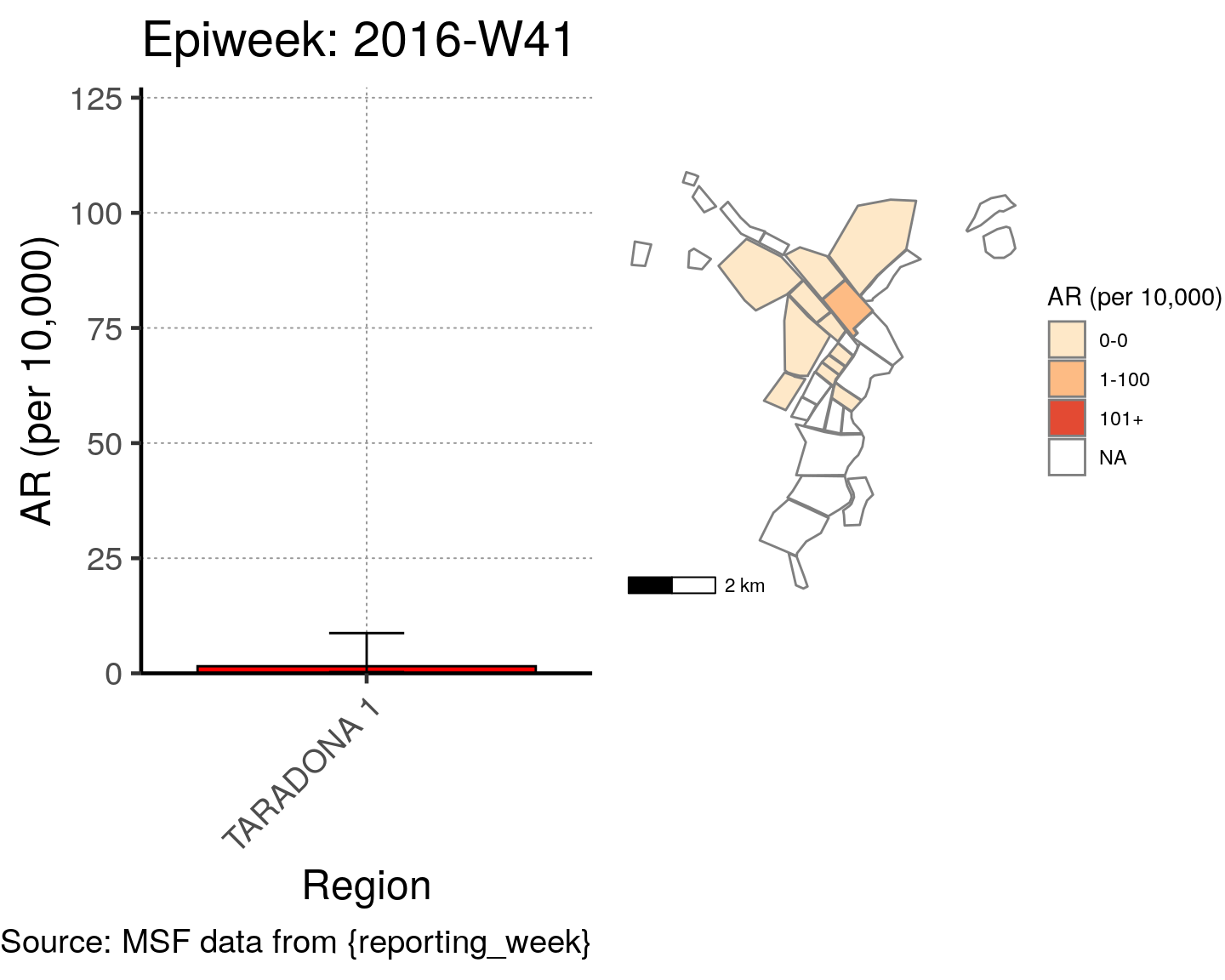 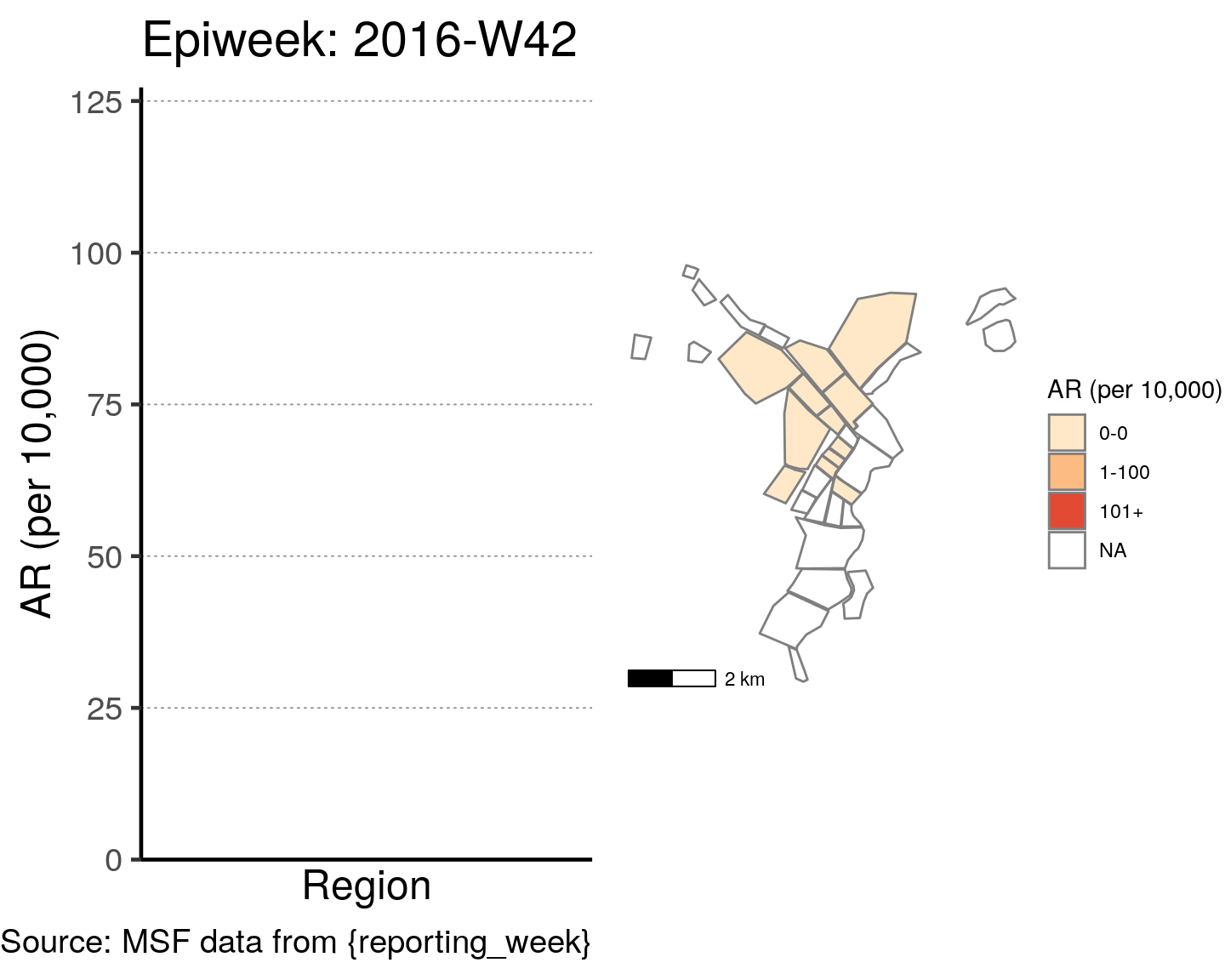 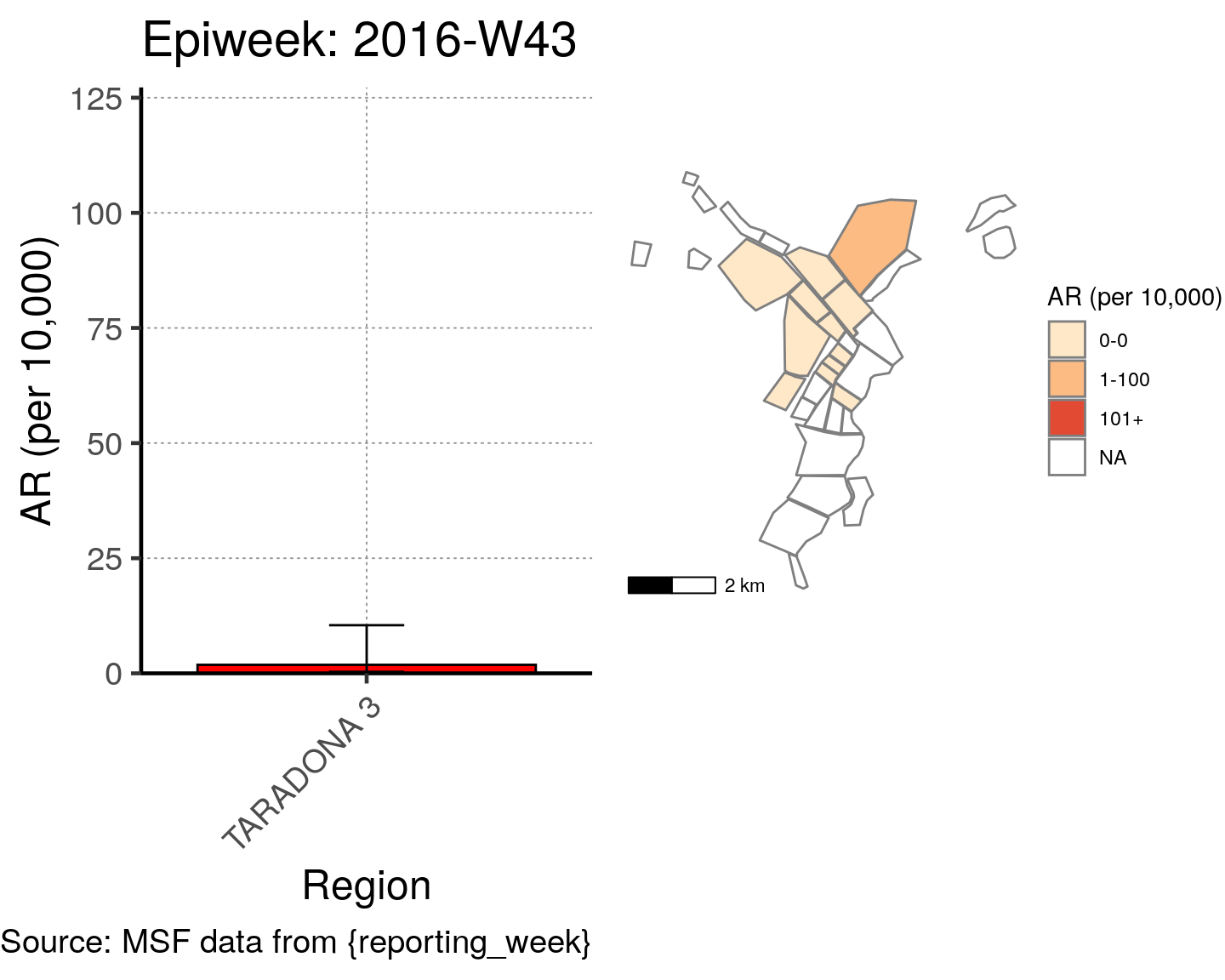 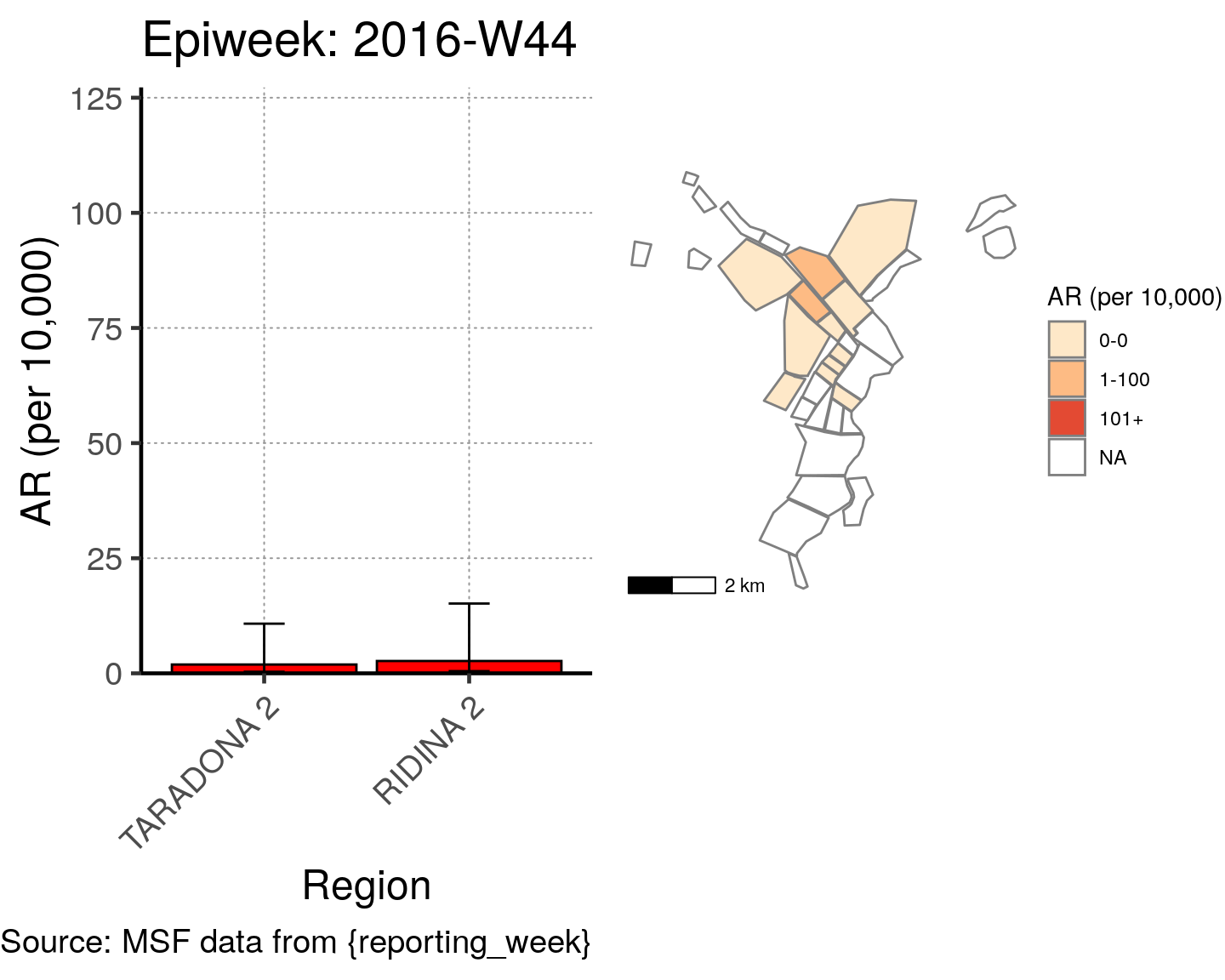 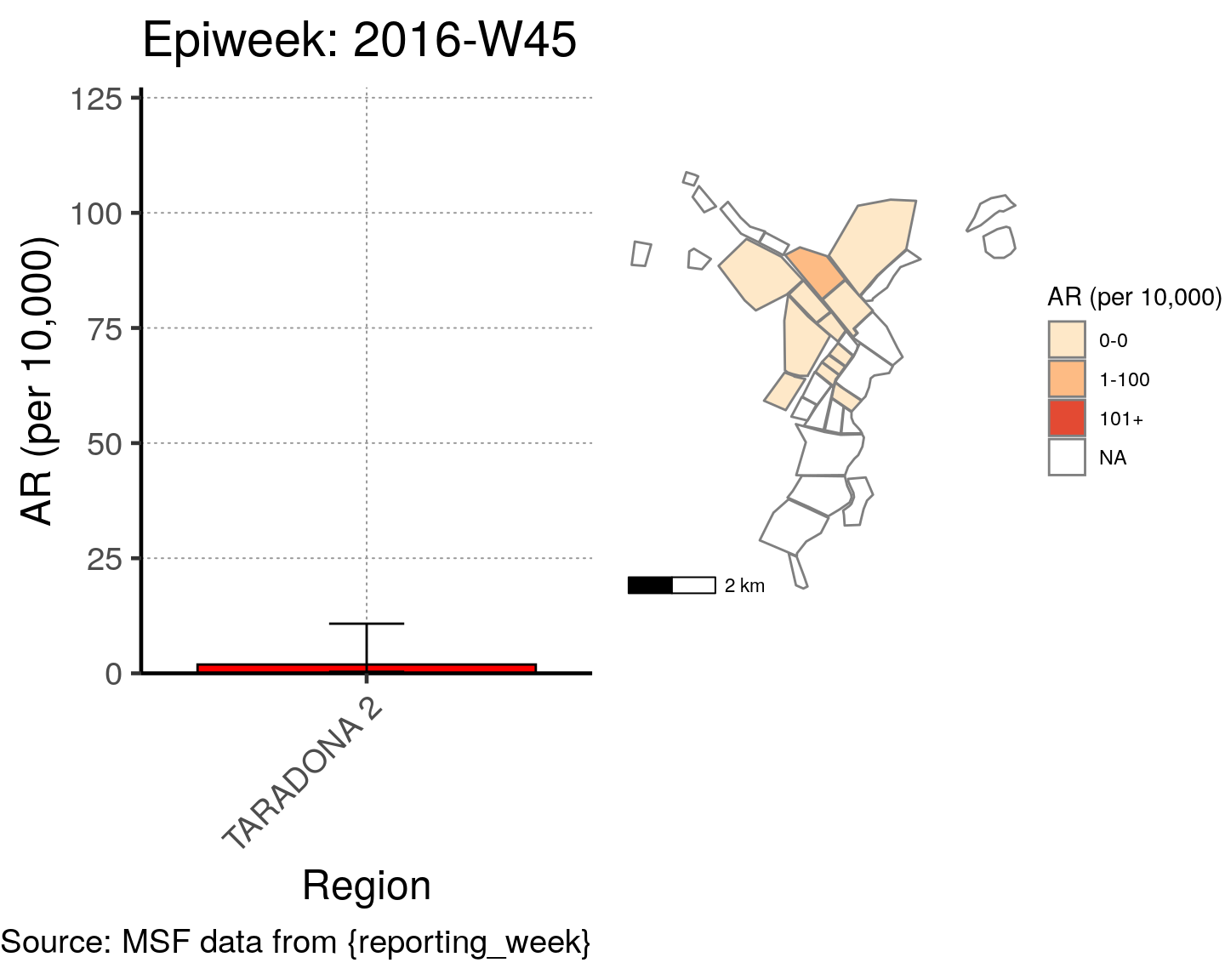