Overview of this page

These pages will demonstrate use of the Acute Jaundice Syndrome (AJS) outbreak template with data from an outbreak in Am Timan, Chad. This case study uses data that is not standardized with the MSF data dictionary, and so reflects a more challenging use case.

Getting started with the sitrep package and opening the correct template Please review the getting started page for instructions on the following start-up steps:

DISCLAIMER: The real data from the outbreak has been used for the training materials linked to the outbreak templates of the R4epis project. The Chadian Ministry of Health (MoH) has approved the use of this data for training purposes. Please note, that some data has been adapted in order to best achieve training objectives. Also, the GPS coordinates included in the dataset do not correspond to real cases identified during this outbreak. They have been generated exclusively for training purposes.

In early September 2016, a cluster of severely ill pregnant women with jaundice was detected at the Am Timan Hospital in the maternity ward. Following rapid tests conducted in Am Timan and confirmatory testing in the Netherlands, this was confirmed as due to HEV infection. Thus the MoH and MSF outbreak response was activated.

The response consisted of four components:

The outbreak linelist data was combined data from the active CBS data and the clinical data from the hospital. The CBS functioned with community health workers visiting all households in the town every two weeks and actively searching for people with Acute Jaundice Syndrome (AJS). For this group of persons (suspected cases), only those that were visibly ill or that were pregnant were referred to the hospital for clinical assessment and admission if required. Persons that self-reported to the hospital or that arrived after referral would undergo a clinical assessment and a rapid test for HEV for diagnosis. Thus only for people assessed at the hospital were we able to capture a confirmed case status.

For the duration of the outbreak we detected 1193 suspected cases, 100 confirmed cases and discarded 150 cases with AJS who were not positive for HEV infection. 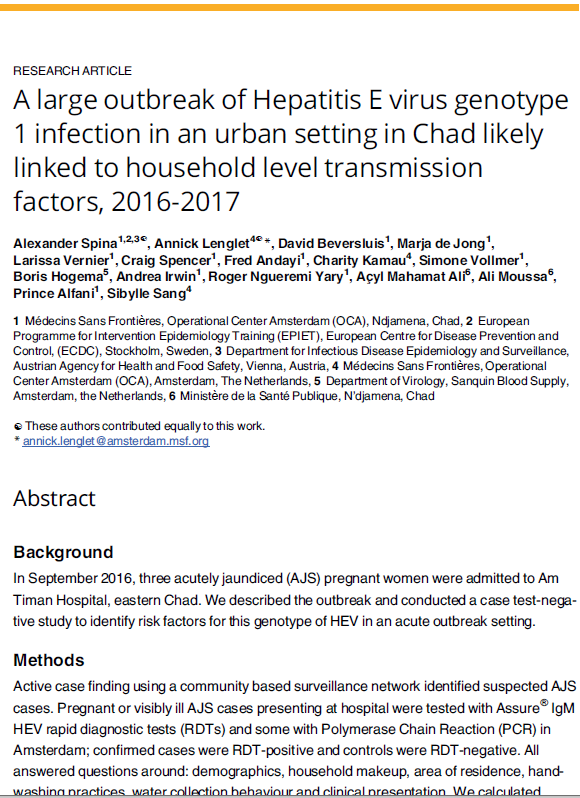